Answer to Guess Who? #3: AMPARO KARAGDAG

THE QUEEN OF PHILIPPINE MOVIES
Click images to enlarge

THE FACE THAT REFRESHES
FIRST LADY OF PHILIPPINE CINEMA
THE QUEEN OF ALL MOVIE QUEENS
Posted by James DR at 5:10 PM 3 comments: Answer to Guess Who? #2: ELSA ORIA JUAN TAMAD GOES INDIE
A special tribute to Manuel Conde, the pioneer of the Filipino Independent Film was held last July 16, 2008 at the CCP Little Theater and Lobby. The event was part of the Cinemalaya International Film Festival (July 11-20) that featured over one hundred full-length and short feature films by young Filipino independent filmmakers, with an indie film congress, exhibition and film review competition. The tribute began at 3:30 pm with the launching of The Cinema of Manuel Conde, a book on the life and works of Manuel Conde authored by Nicanor G. Tiongson with book signing followed by the opening of the exhibit and naming of the CCP Dream Theater to Tanghalang Manuel Conde by the Conde Family led by his wife Mrs. Julita Urbano, his daughter Nene Urbano and his eldest son Jun Urbano who is also a director, actor and writer and popularly known as Mr. Shooli, at the CCP Little Theater Lobby, followed by the screening of "Genghis Khan" at the Little Theater at 6:15 pm. In attendance were some movie stars who worked with Manuel Conde like Delia Razon, Perla Bautista, Sylvia Gumabao and Eddie Garcia. I saw some other celebrities like Ricky Davao, Ronnie Lazaro, directors Joel Lamangan, Carlitos Siguion-Reyna and Mike de Leon. Director Jun Urbano (in his now-famous character Mr. Shooli get-up) gave his response in behalf of the Manuel Conde family by sharing to the audience the life, experiences and aspirations of the great Filipino filmmaker. THE CINEMA OF MANUEL CONDE is the first and only comprehensive study on the life and works of the Filipino film director whom respected film critic T.D. Agcaoili described as one of the three most important directors of his time. the book traces the development of Manuel Conde as a film artist, through the 40 films he created from 1940 to 1974. It depicts his humble beginnings in Daet, Camarines Norte, his apprenticeship in Filippine Films, and his first directorial stint in LVN Pictures (1940-1942). It chronicles the first golden age in Conde's career (1946-1952), when he established his own MC Productions and came out with Si Juan Tamad, Si Juan Daldal (Anak Ni Juan Tamad), Prinsipe Paris, Siete Infantes de Lara, Sigfredo, and most of all, Genghis Khan, the first Filipino film to compete in an international film festival, in this case the Venice Film Festival of 1952. It discusses the popular films Conde did for LVN after his return from Europe (1953-1958), like Ang Ibong Adarna, Ikaw Kasi, Bahala Na, and Tingnan Natin, as well as MC Productions' Krus Na Kawayan. It highlights Conde's second golden age (1959-1963) when he produced, directed and starred in his most significant productions, namely Molave, and the three Juan Tamad classics: Juan Tamad Goes to Congress, Juan Tamad Goes to Society, and Si Juan Tamad at si Juan Masipag sa Pulitikang Walang Hanggan. Finally, it describes the last years (1964-1985) when Conde did the first episode of the unreleased Tadhana and the Juan Tamad productions on television, and later ventured into politics and treasure-hunting. In ending, the book assesses Conde's contributions to Filipino national cinema through films that embodied Filipino cultural history, depicted and critiqued local customs and traditions, foregrounded and examined contemporary political and social issues, employed but innovated on the commercial genres of his time, and opened Filipino Cinema to the world. The hardbound coffee table book measures 8 1/2" and 11" with 280 pages of more than 300 rare photographs and images in duotone and color.
FILMS OF MANUEL CONDE SCREENED DURING THE FESTIVAL
Genghis Khan (1950). For winning the right to the pasture lands for his tribe, Temujin and his village are plundered by Burchou. Temujin then builds an army and conquers many lands and is called Genghis Khan ("king without peer"). He defeats Burchou but is "enslaved" by his love for Burchou's daughter, Lei-Hai. Ibong Adarna (1941). Three princes search for the Adarna bird, whose song alone can cure their father, the king of Berbania. the youngest and kindest, Don Juan, succeeds. After the king is cured, Don Juan liberates three princesses, who end up marrying the three princes. Senorito (1953). Eddie Ramirez is a prodigal son. To change him, his father Don Rafael employs Aida to pose as a rich woman who will use her charms to make Eddie turn his back on his profligate lifestyle. the ploy succeeds but the two really fall in love with each other, against Don Rafael's rules. Krus Na Kawayan (1956). After the Vietnamese war of liberation against the French, Vinh comes home to find his village dominated by communists who execute his parents and incarcerate him. he also discovers that his sweetheart, Lan, has joined the tyrants. Vinh rejects Lan and eventually escapes from Vietnam. El Robo (1957). Don Silvestre's two sons by his legitimate wife, Lucio and Armando, hate their half-brother Rodrigo, who later turns out to be the most responsible of the three. Lucio joins the bandits and attacks Silvestre's hacienda. But Rodrigo secretly defends both Lucio and his father, until a misunderstanding pits Rodrigo against Lucio. Venganza (1958). Simon sets to avenge his bride's death at the hands of the bandit Martinico. By accident, he captures Martinico's bride-to-be Belen and uses her to find Martinico. But the bandits attack and bring Simon and Belen (who has now fallen in love with Simon) to the bandits' lair where they are to be executed. Pilipino Kostum - No Touch! (1955). City boy Arturo falls in love with barrio lass Adeling, whom he must court the traditional way, i.e. by rendering free physical service to her family. the "modern" ways clash with old-fashioned practices, but in the end, Arturo marries Adeling. Me with my ninong, Jun Urbano (aka Mr. Shooli) and my sister Au Urbano. 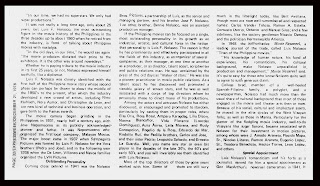 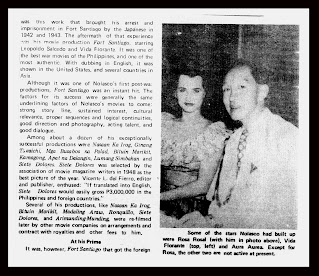 
For more readings and information, log on to www.tasaday.com

THE MAKING OF "HAPPY DAYS ARE HERE AGAIN" In 1974, the Big 3 studios of the 50s, LVN Pictures, Sampaguita Pictures and Premiere Productions reproduced a full-length movie showcasing a compilation of the musical comedies produced by the three studios. It was a painstaking job for the researchers since most of the best musicals produced by the three studios were either lost or destroyed. At the start of the project, director Lamberto V. Avellana was supposed to direct the film but eventually replaced by Ciro Santiago after so many changes in the project including the script. He ended up as consultant of the movie. The film was HAPPY DAYS ARE HERE AGAIN, with brief narrations by movie stars like Gloria Romero, Nida Blanca, Susan Roces, Leopoldo Salcedo, Jaime de la Rosa, Eddie Gutierrez, Tirso Cruz III, Pugo, German Moreno and Ike Lozada.
Here is a magazine clipping (Expressweek, November 14, 1974) entitled"The Making of Happy Days Are Here Again" as written by Cris D. Almario, one of the researchers for Premiere Productions (his associate was Bernardo C. Bernardo). The other researchers were Socrates Jose and Eman Lacaba for LVN Pictures and Medy Tarnate and Joel Apuyan for Sampaguita Pictures. *Click images to enlarge.
Posted by James DR at 1:26 PM No comments: