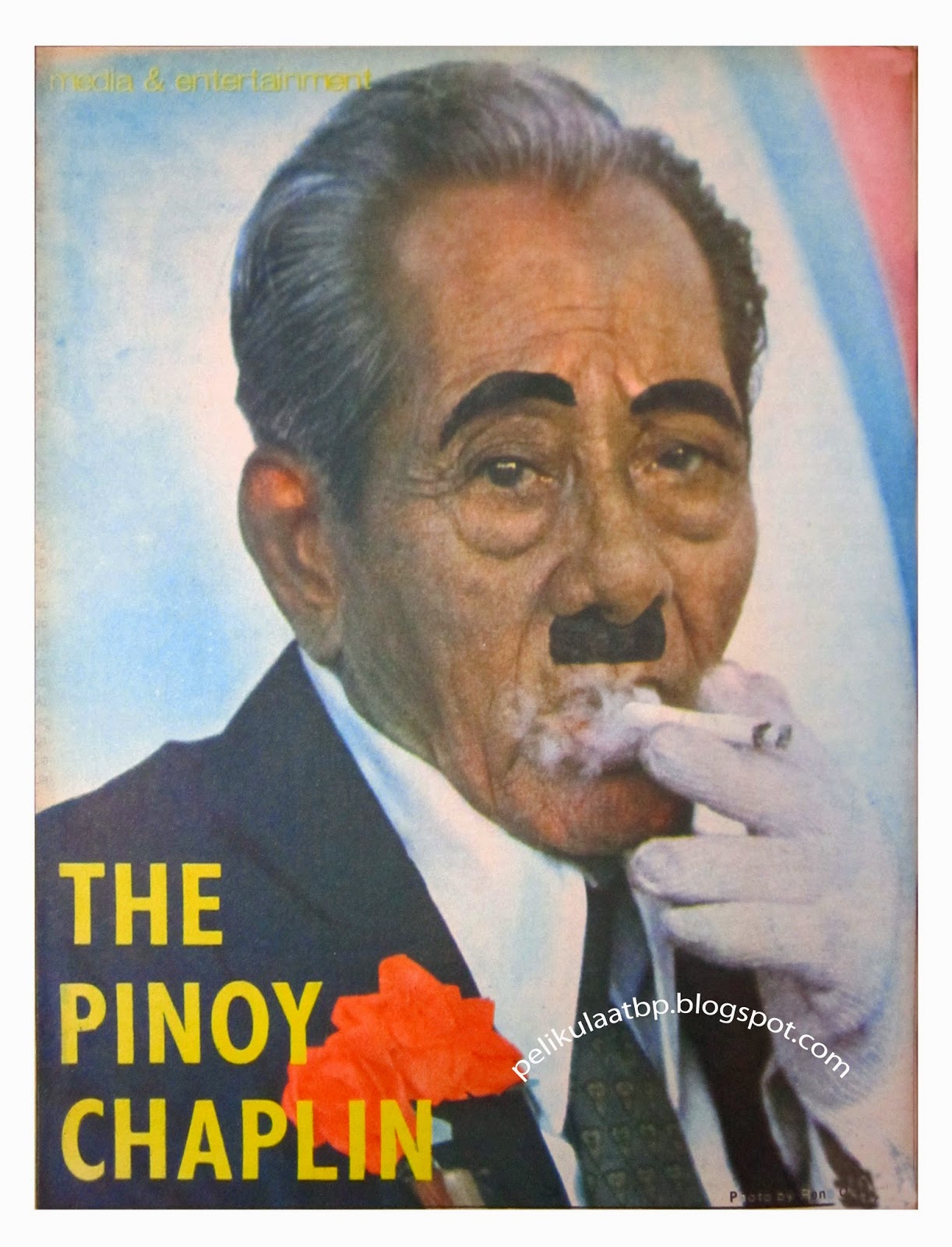 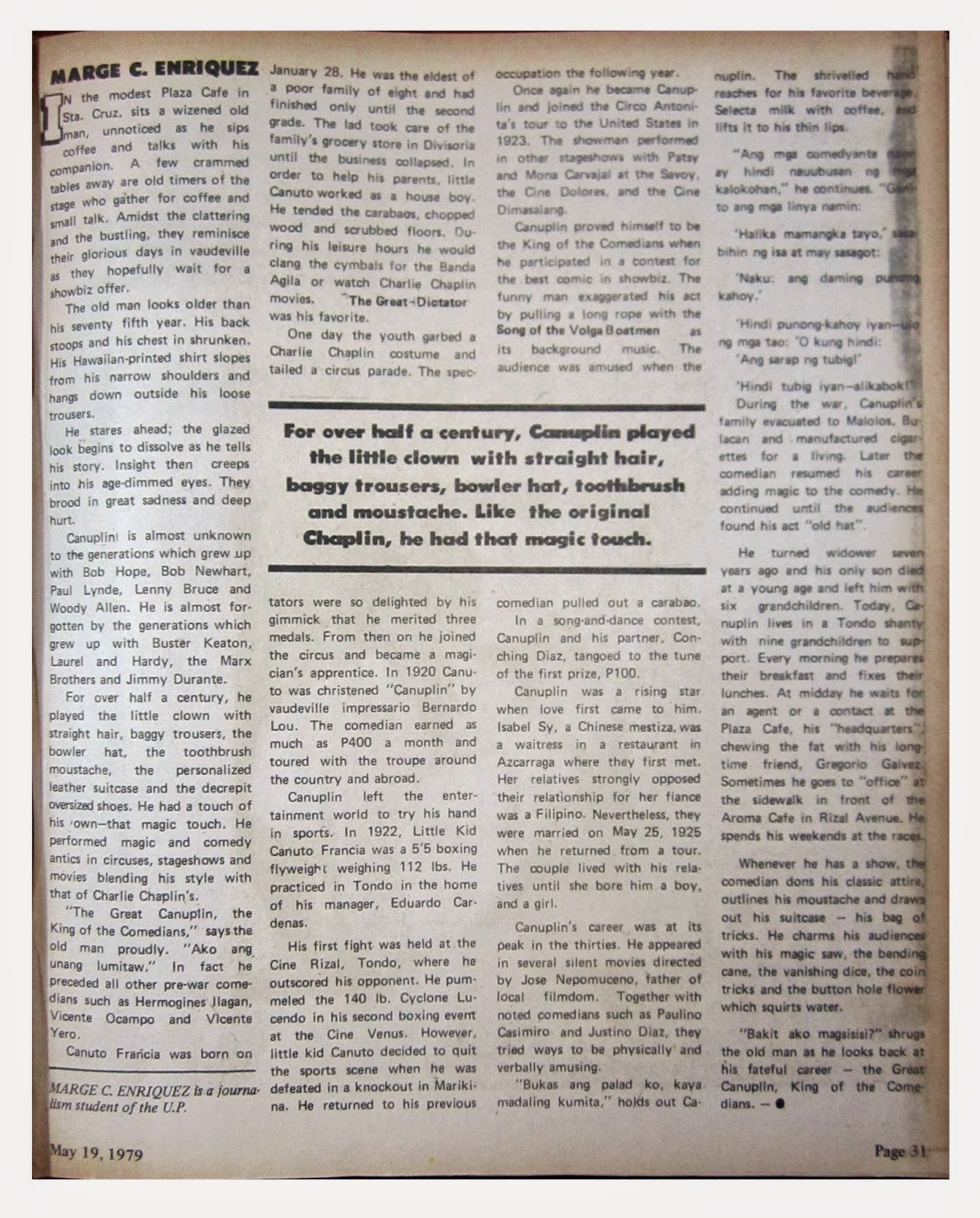 IN the modest Plaza Cafe in Sta. Cruz, sits a wizened old man, unnoticed as he sips coffee and talks with his companion.  A few crammed tables away are old timers of the stage who gather for coffee and small talk.  Amidst the clattering and the bustling, they reminisce their glorious days in vaudeville as they hopefully wait for a showbiz offer.

The old man looks older than his seventy fifth year.  His back stoops and his chest in shrunken.  His Hawaiian-printed shirt slopes from his narrow shoulders and hangs down outside his loose trousers.

He stares ahead; the glazed look begins to dissolve as he tells his story.  Insight then creeps into his age-dimmed eyes.  They brood in great sadness and deep hurt.

For over half a century, he played the little clown with straight hair, baggy trousers, the bowler hat, the tootbrush moustache, the personalized leather suitcase and the decrepit oversized shoes.  He had a touch of his own -- that magic touch.  He performed magic and comedy antics in circuses, stageshows and movies blending his style with that of Charlie Chaplin's.

"The Great Canuplin, the King of the Comedians," says the old man proudly.  "Ako ang unang lumitaw."  In fact he preceded all other pre-war comedians such as Hermogenes Ilagan, Vicente Ocampo and Vicente Yero.

Canuto Francia was born on January 28.  He was the eldest of a poor family of eight and had finished only until the second grade.  The lad took care of the family's grocery store in Divisoria until the business collapsed.  In order to help his parents, little Canuto worked as a house boy.  He tended the carabaos, chopped wood and scrubbed floors.  During his leisure hours he would clang the cymbals for the Banda Agila or watch Charlie Chaplin movies.  "The Great Dictator" was his favorite.

One day the youth garbed a Charlie Chaplin costume and tailed a circus parade.  The spectators were so delighted by his gimmick that he merited three medals.  From then on he joined the circus and became a magician's apprentice.  In 1920 Canuto was christened "Canuplin" by vaudeville impressario Bernardo Lou.  The comedian earned as much as P400 a month and toured with the troupe around the country and abroad.

Canuplin left the entertainment world to try his hand in sports.  In 1922, Little Kid Canuto Francia was a 5'5 boxing flyweight weighing 112 lbs.  He practiced in Tondo in the home of his manager, Eduardo Cardenas.

His first fight was held at the Cine Rizal, Tondo, where he outscored his opponent.  He pummeled the 140 lb. Cyclone Lucendo in his second boxing event at the Cine Venus.  However, little kid Canuto decided to quit the sports scene when he was defeated in a knockout in Marikina.  He returned to his previous occupation the following year.

Once again he became Canuplin and joined the Circo Antonita's tour to the United States in 1923.  The showmen perfomed in other stageshows with Patsy and Mona Carvajal at the Savoy, the Cine Dolores, and the Cine Dimasalang.

Canuplin proved himself to be the King of the Comedians when he participated in a contest for the best comic in showbiz.  The funny man exaggerated his act by pulling a long rope with the Song of the Volga Boatmen as its background music.  The audience was amused when the comedian pulled out a carabao.

In a song-and-dance contest, Canuplin and his partner, Conching Diaz, tangoed to the tune of the first prize, P100.

Canuplin was a rising star when love first came to him.  Isabel Sy, a Chinese mestiza, was a waitress in a restaurant in Azcarraga where they first met.  Her relatives strongly opposed their relationship for her fiance was a Filipino.  Nevertheless, they were married on May 25, 1925 when he returned from a tour.  The couple lived with his relatives until she bore him a boy, and a girl.

Canuplin's career was at its peak in the thirties.  He appeared in several silent movies directed by Jose Nepomuceno, father of local filmdom.  Together with noted comedians such as Paulino Casimiro and Justino Diaz, they tried ways to be physically and verbally amusing.

"Bukas ang palad ko, kaya madaling kumita," holds out Canuplin.  The shrivelled hand reached for his favorite beverage, Selecta milk with coffee, and lifts it to his thin lips.

During the war, Canuplin's family evacuated to Malolos, Bulacan and manufactured cigarettes for a living.  Later the comedian resumed his career adding magic to the comedy.  He continued until the audiences found his act "old hat."

He turned widower seven years ago and his only son died at a young age and left him with six grandchildren.  Today, Canuplin lives in a Tondo shanty with nine grandchildren to support.  Every morning he prepares their breakfast and fixes their lunches.  At midday he waits for an agent or a contact at the Plaza Cafe, his "headquarters", chewing the fat with his long-time friend, Gregorio Galvez.  Sometimes he goes to "office" at the sidewalk in front of the Aroma Cafe in Rizal Avenue.  He spends his weekends at the races.

Whenever he has a show, the comedian dons his classic attire, outlines his moustache and draws out his suitcase -- his bag of tricks.  He charms his audiences with his magic saw, the bending cane, the vanishing dice, the coin tricks and the button hold flower which squirts water.

"Bakit ako magsisisi?" shrugs the old man as he looks back at his fateful career -- the Great Canuplin, King of the Comedians. 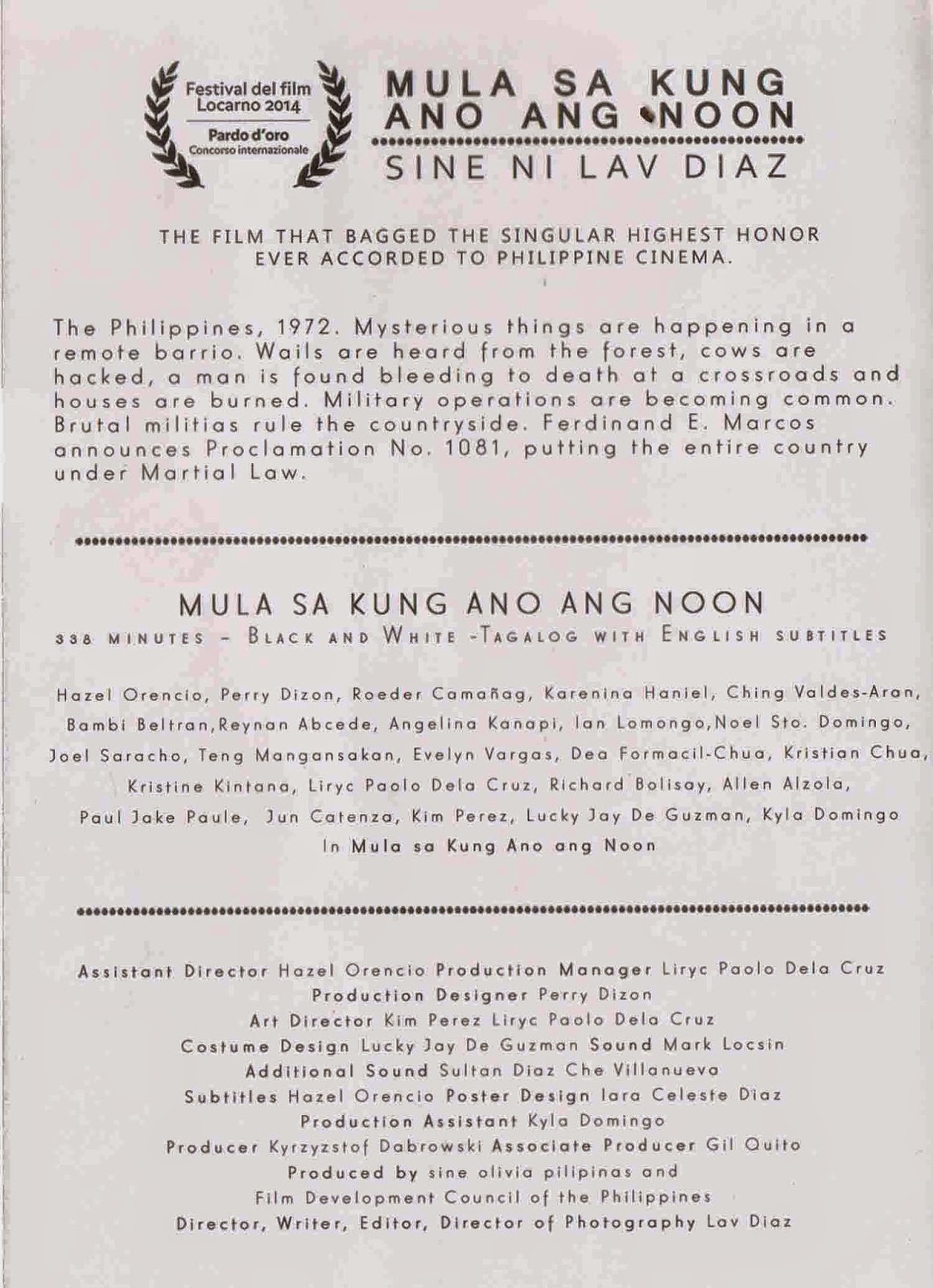 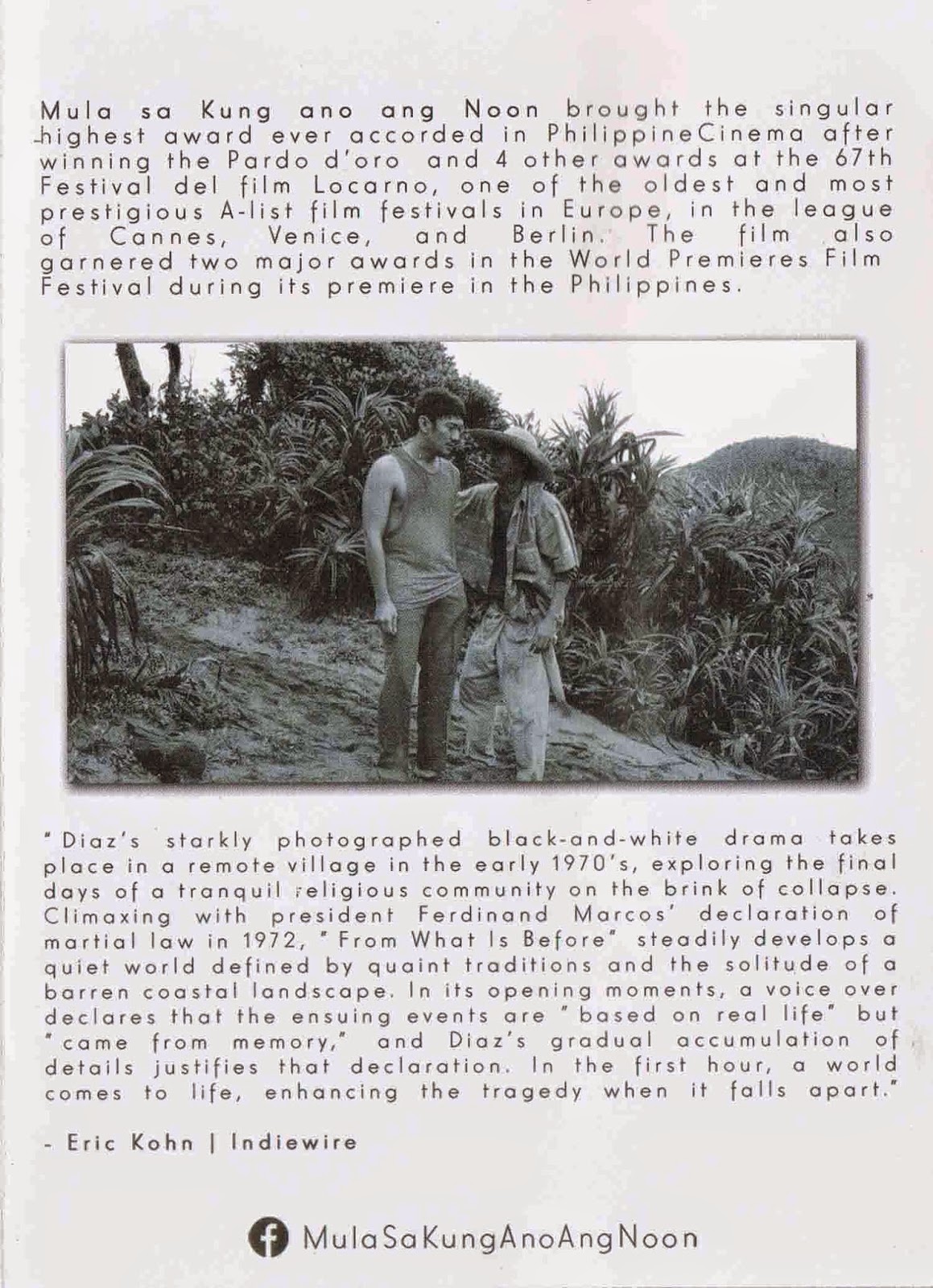 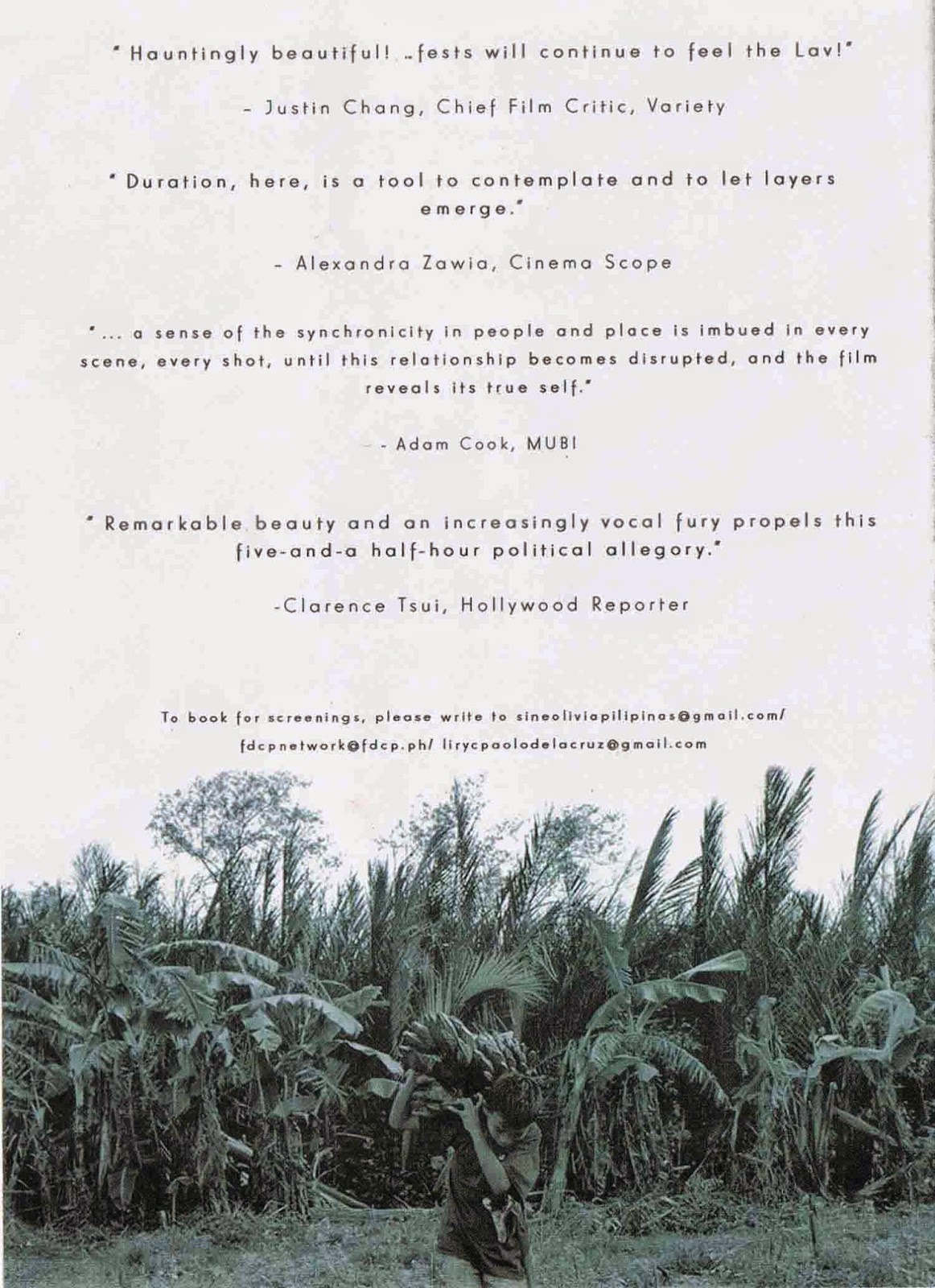 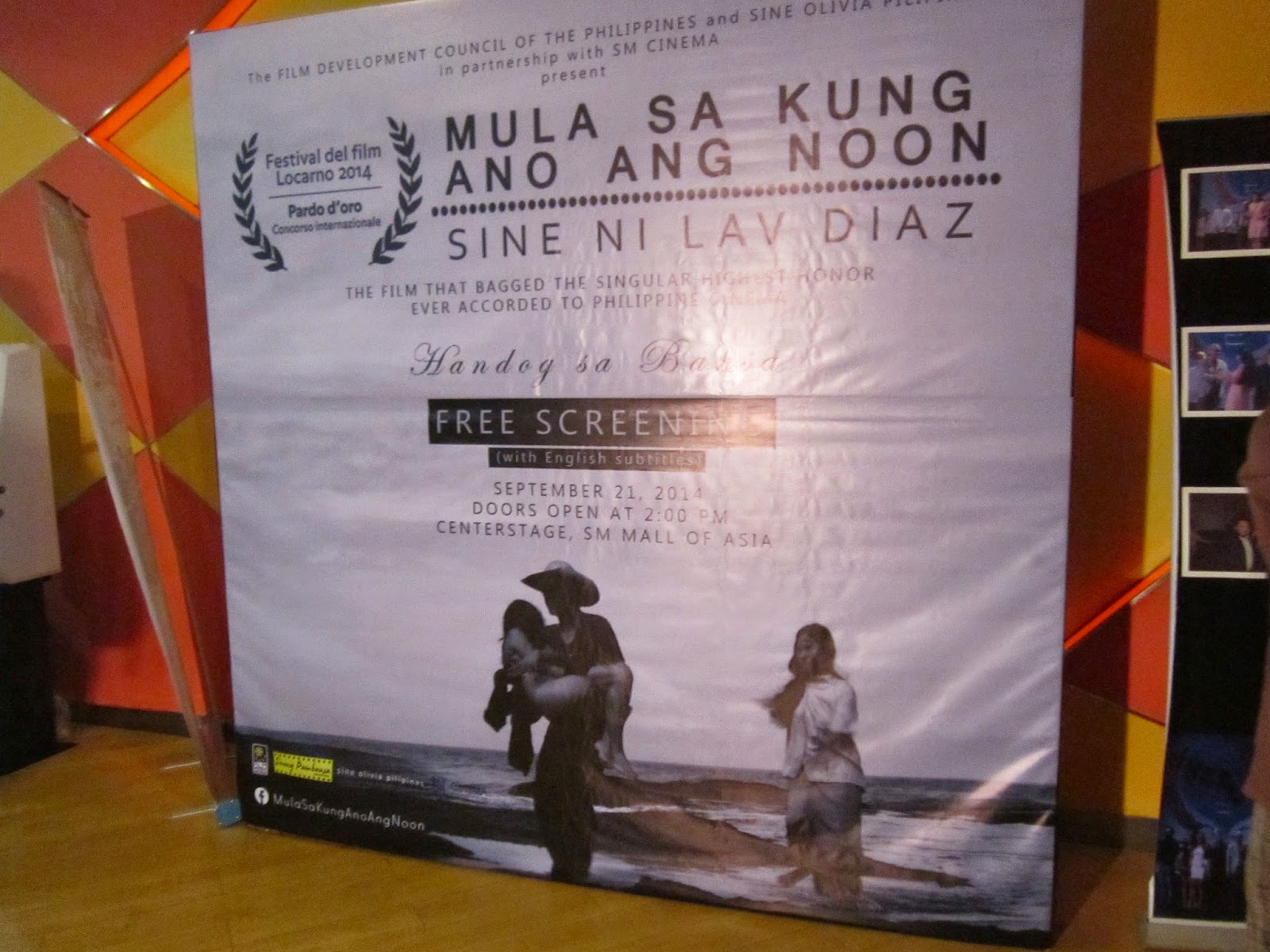 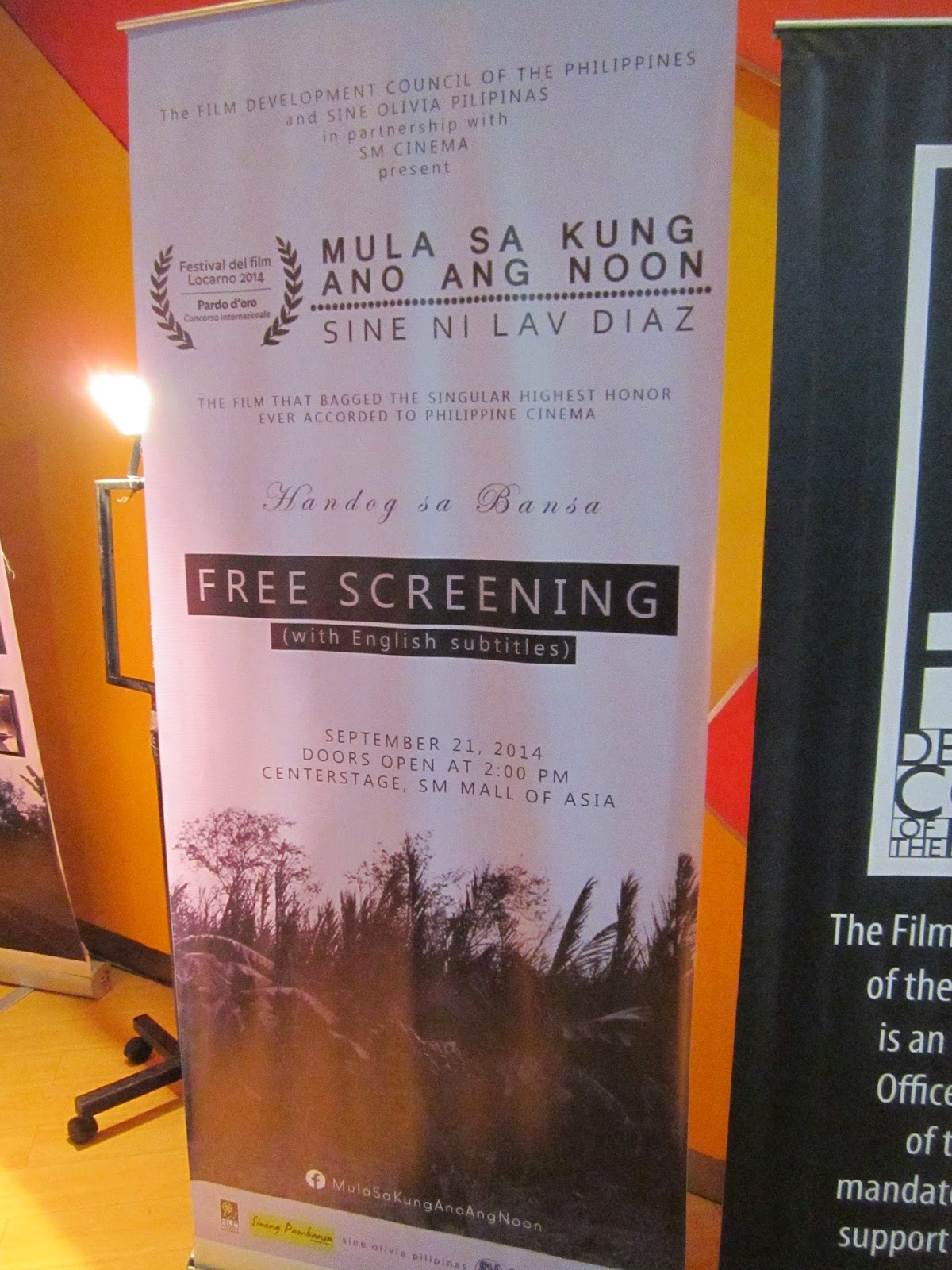 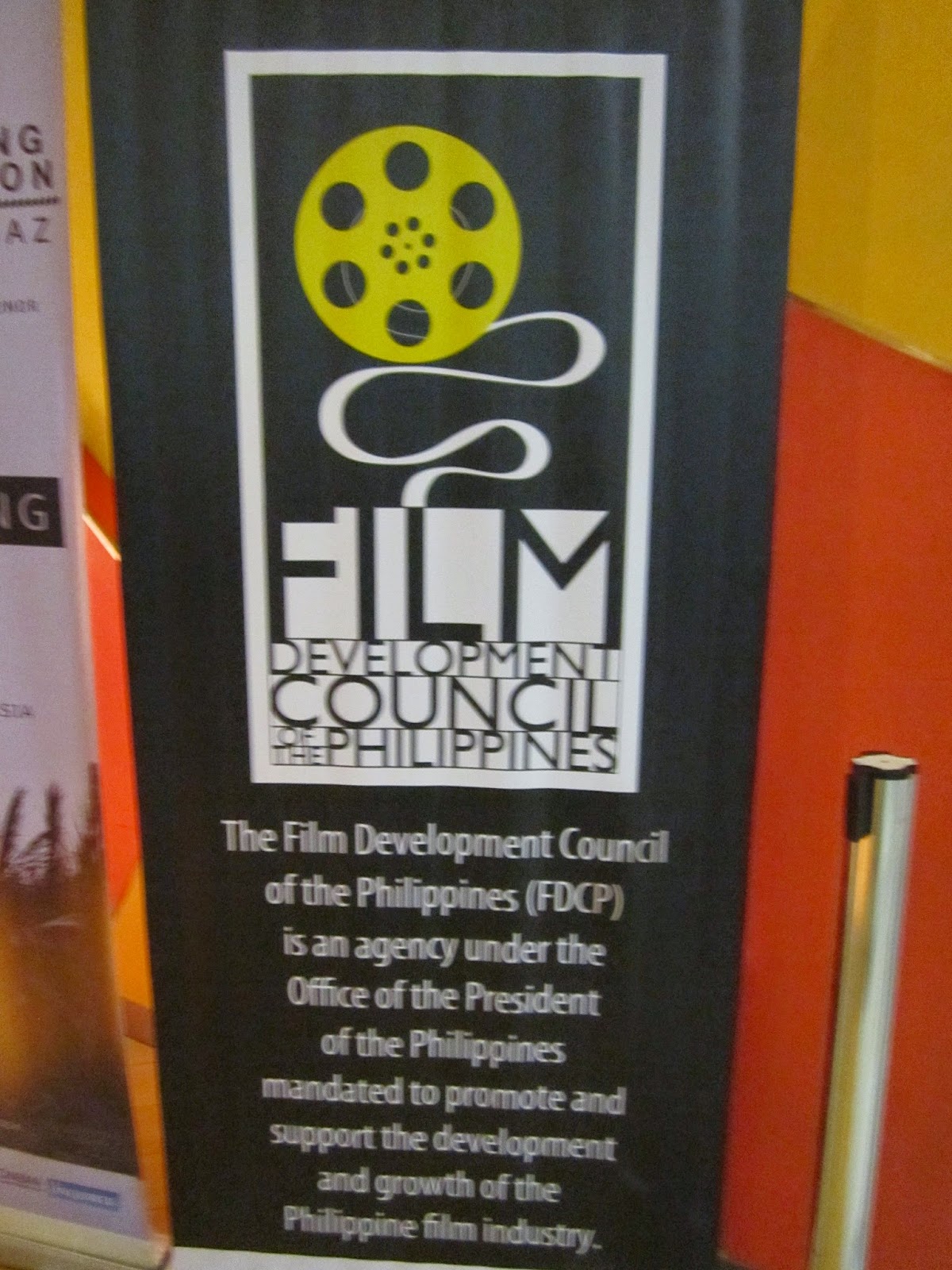 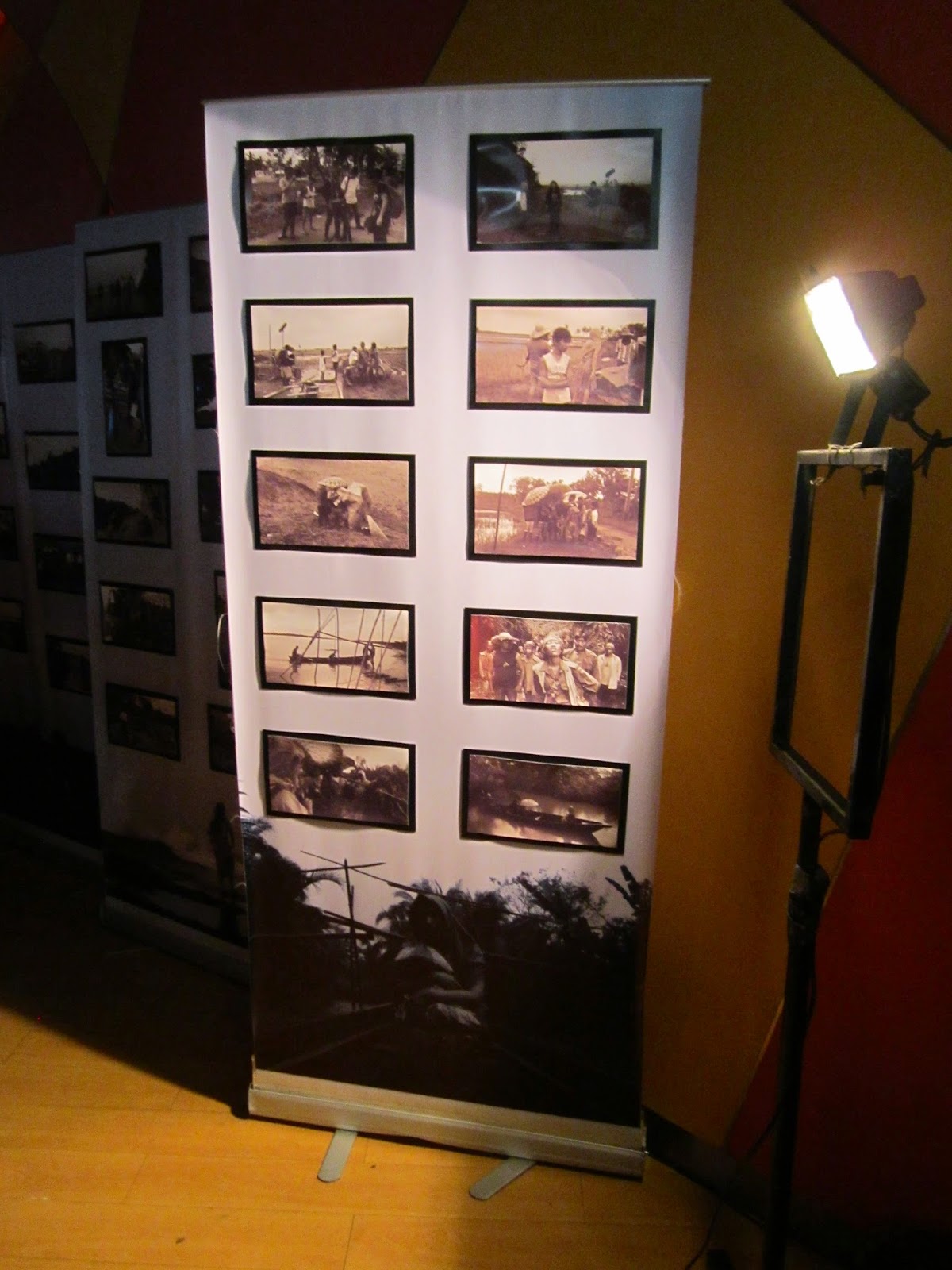 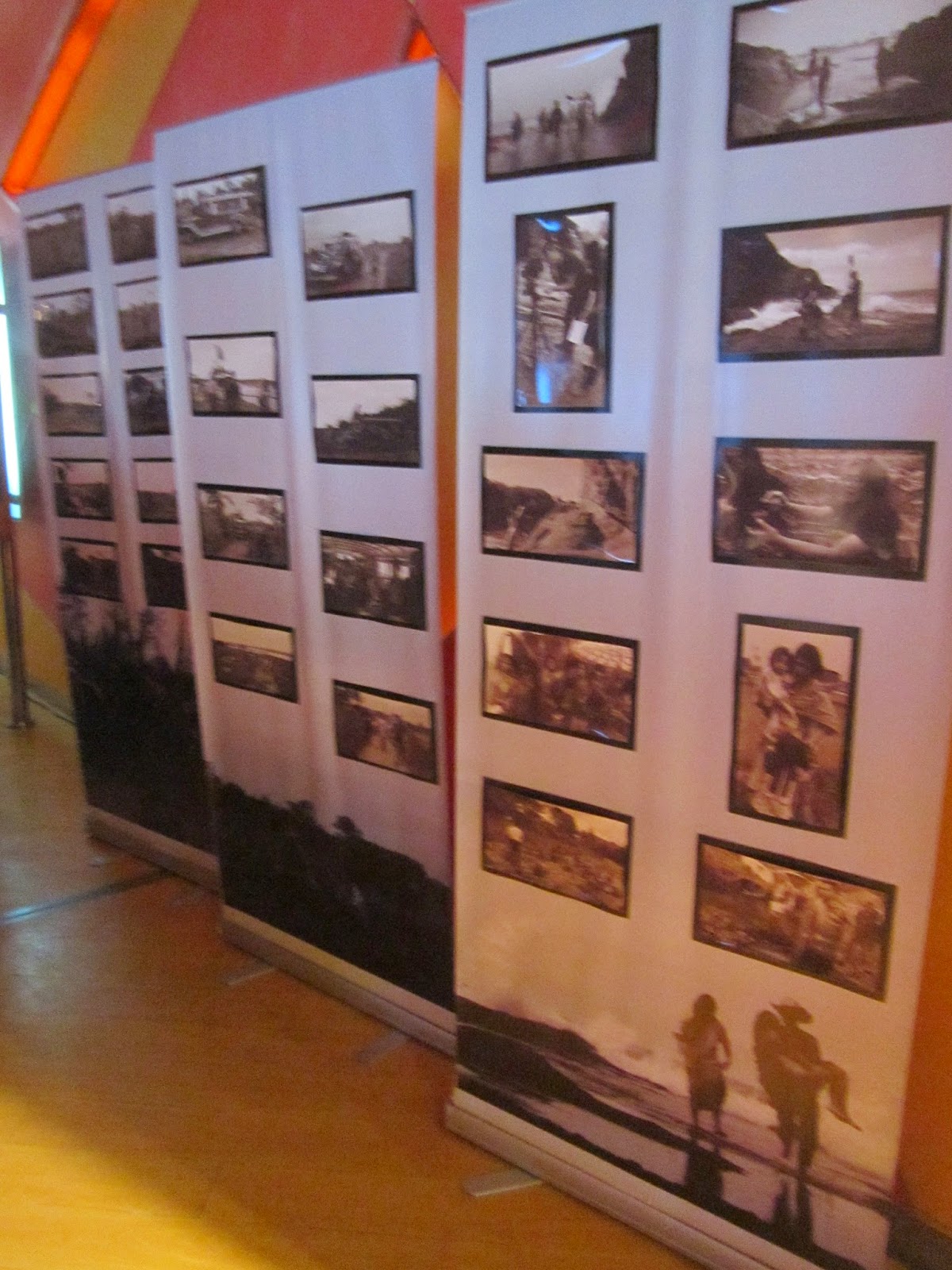 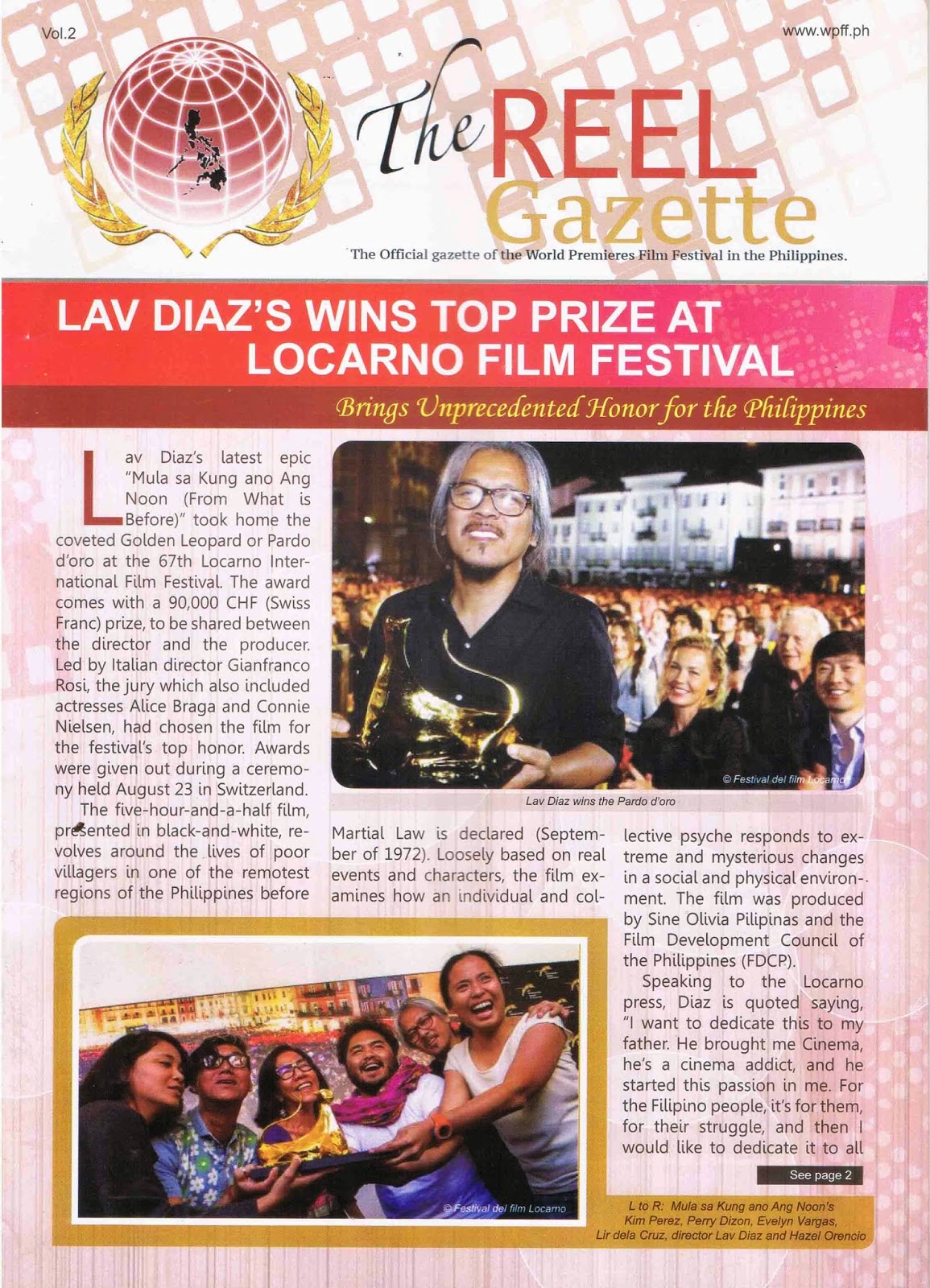 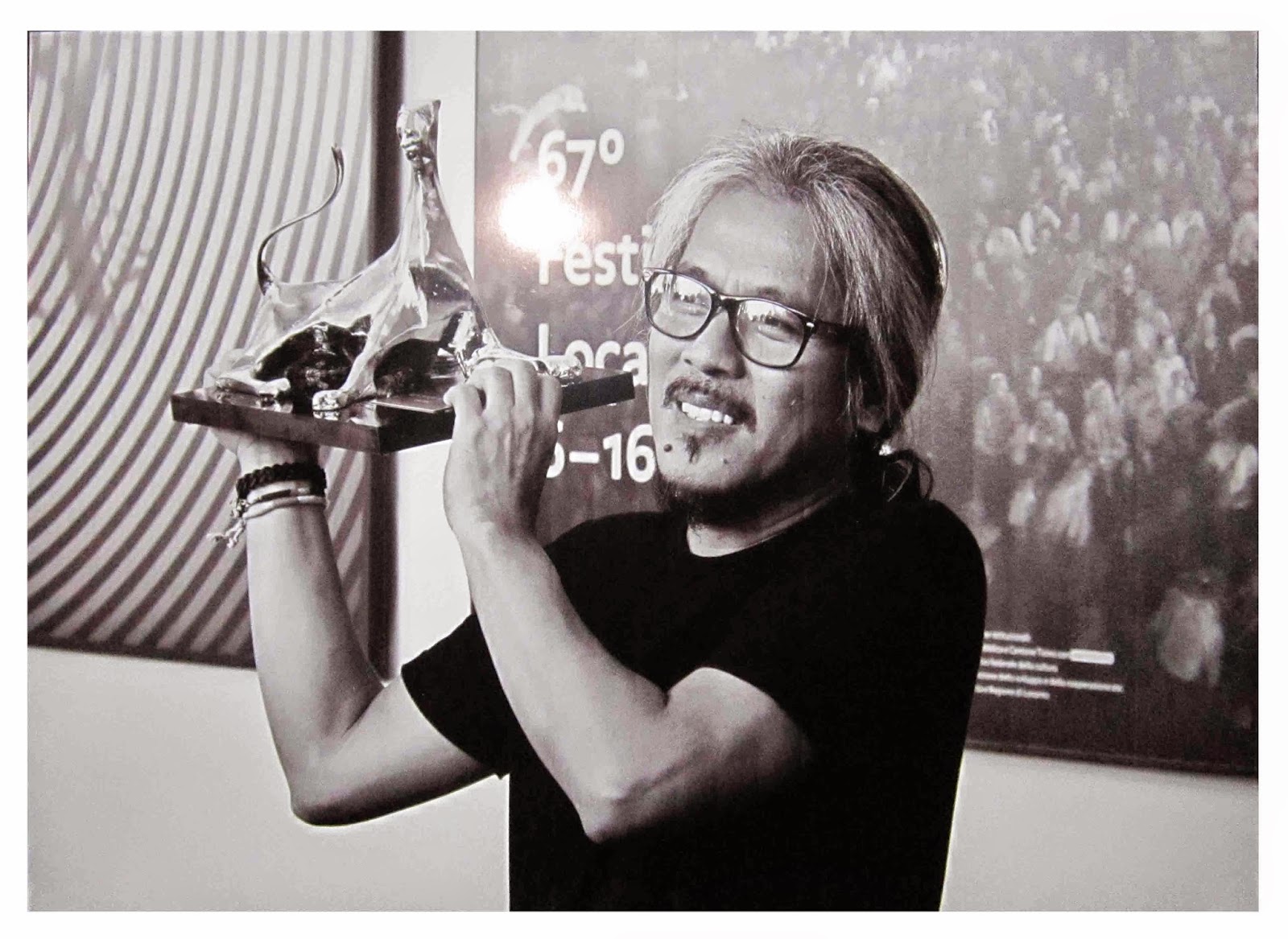 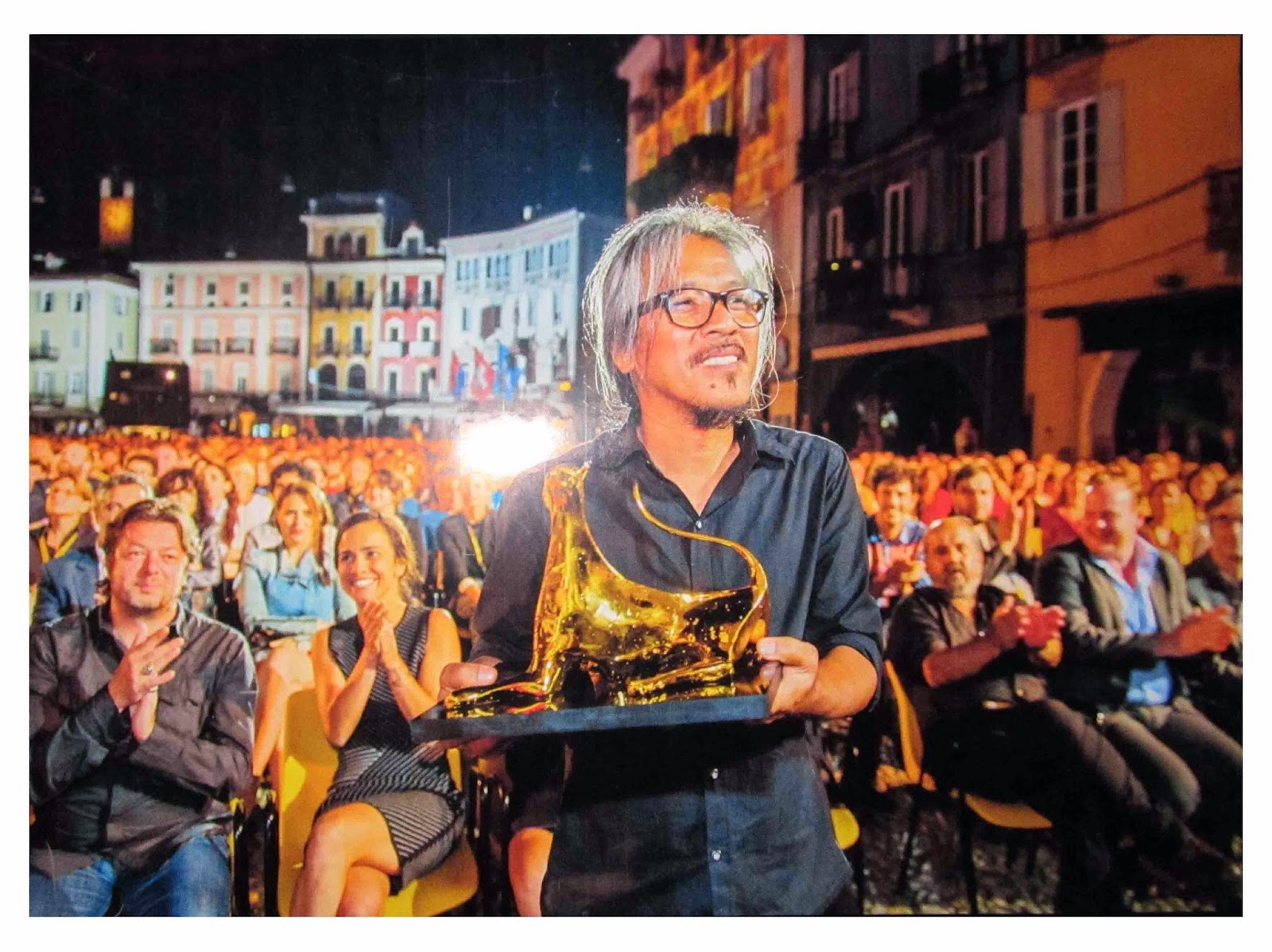 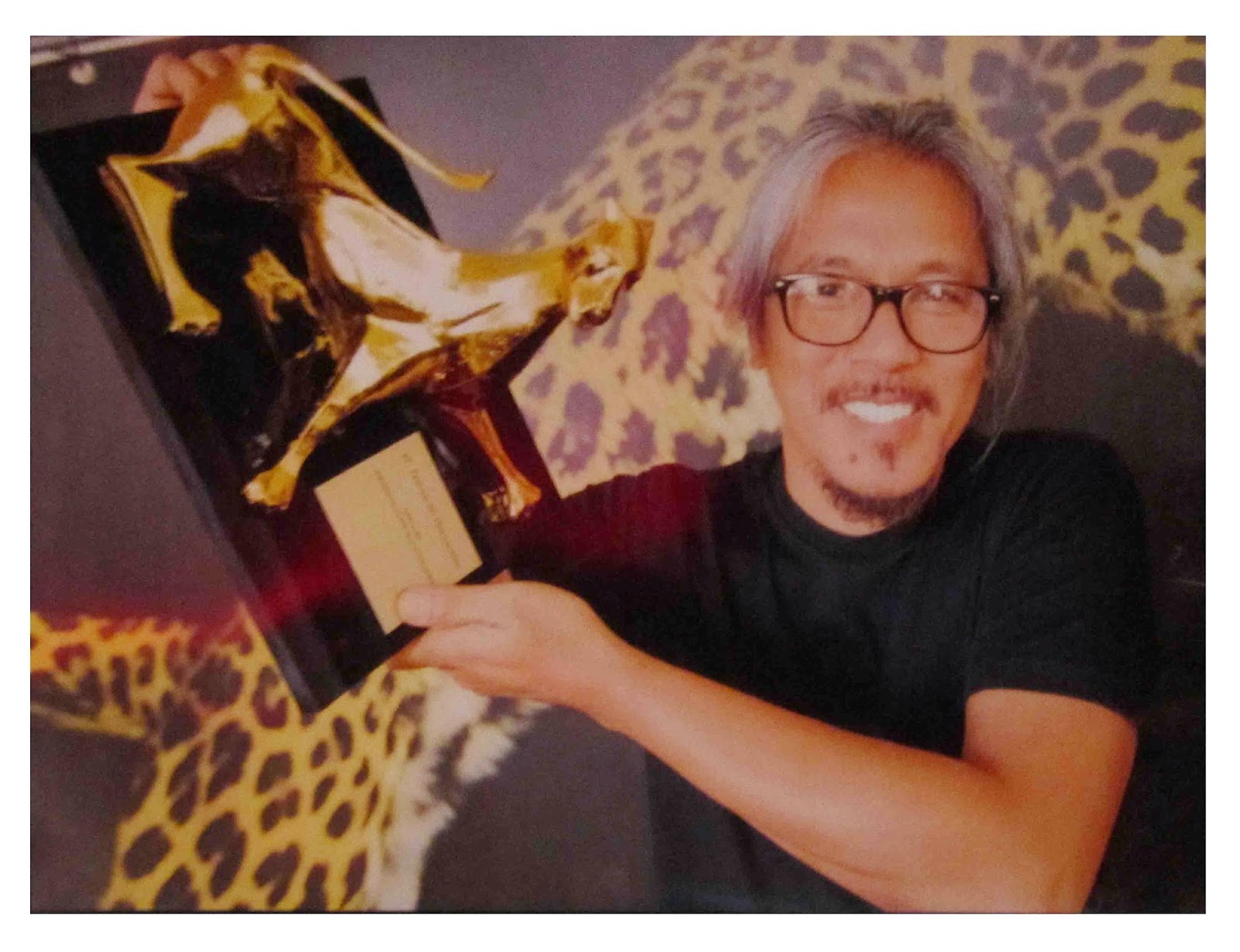 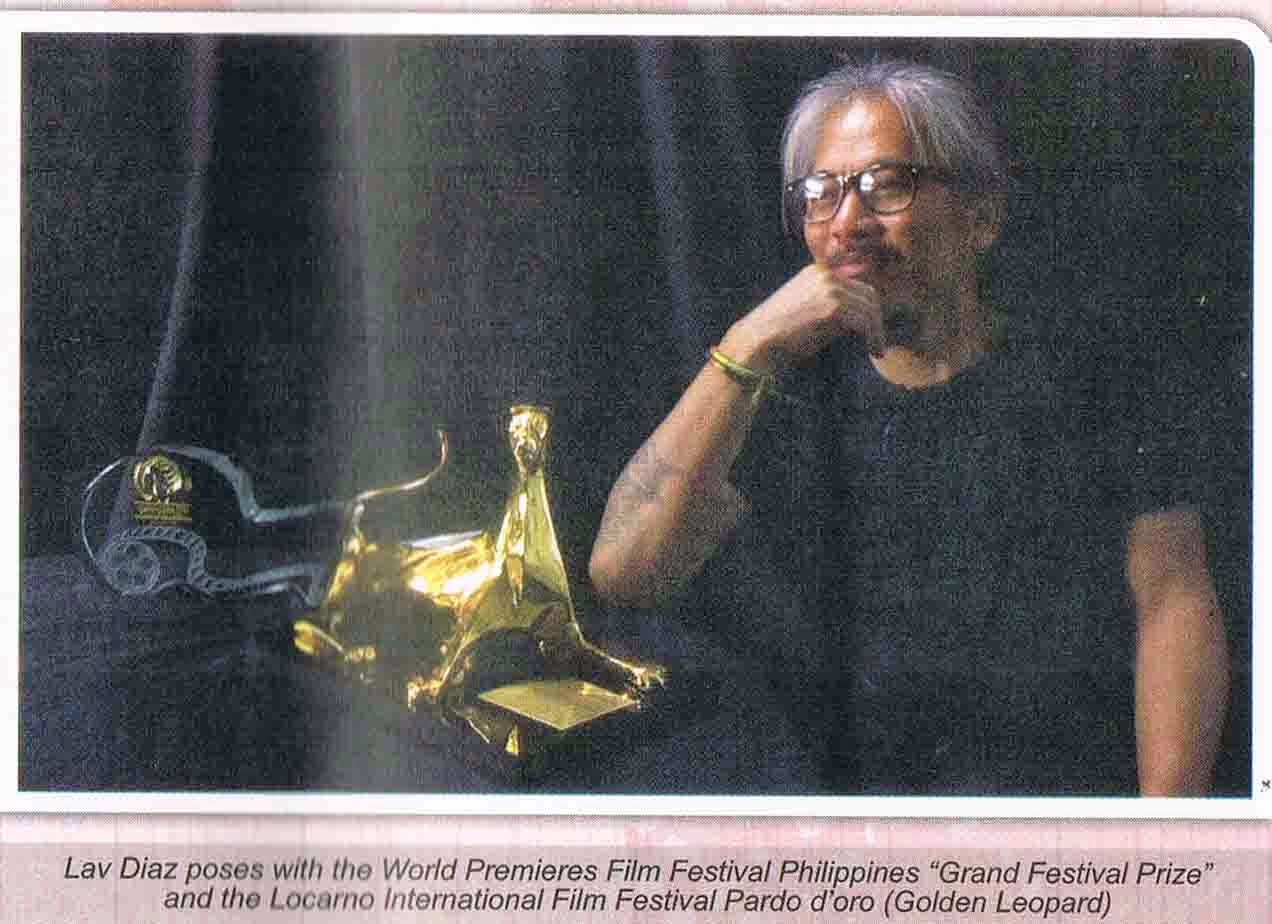 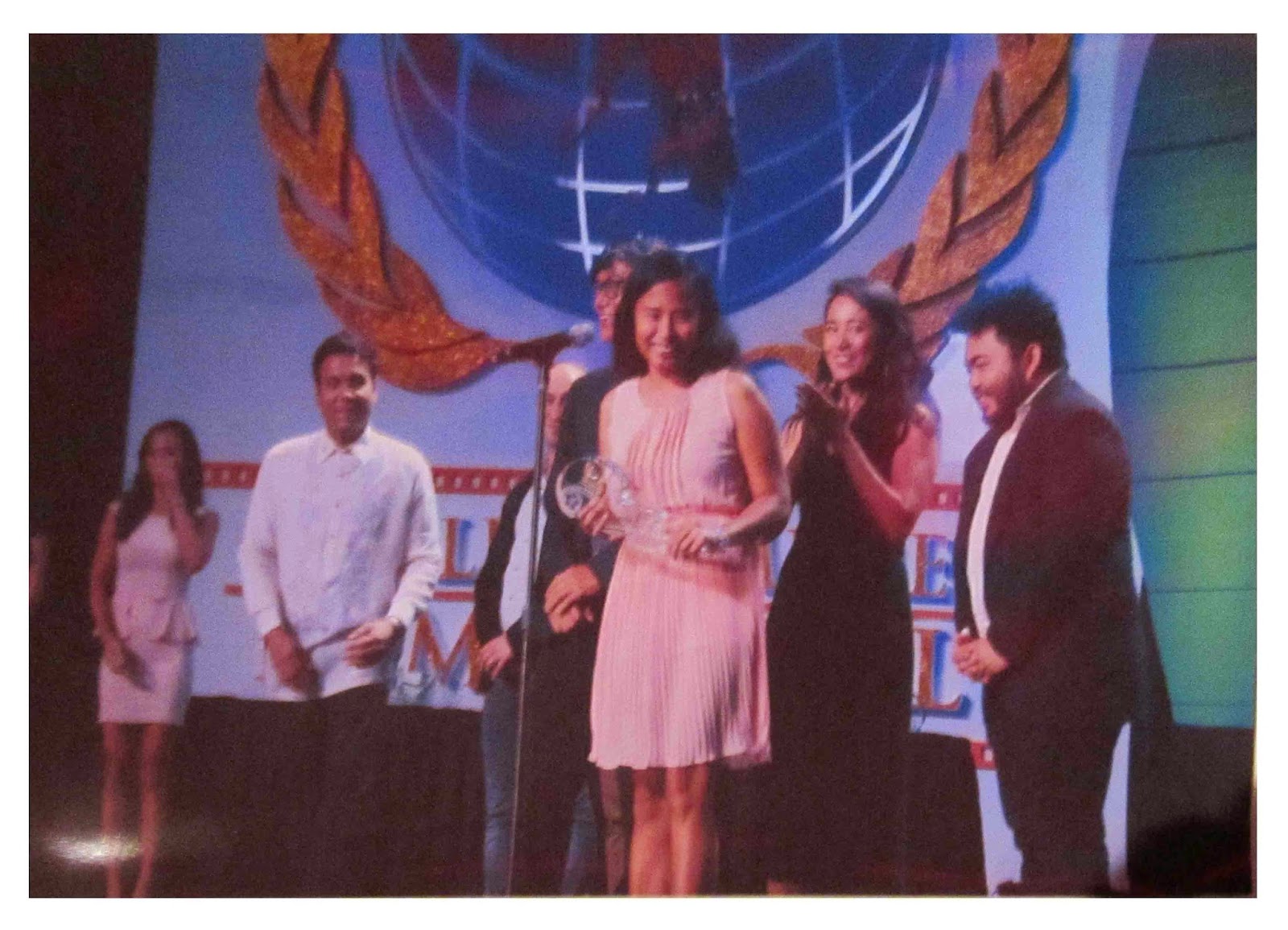 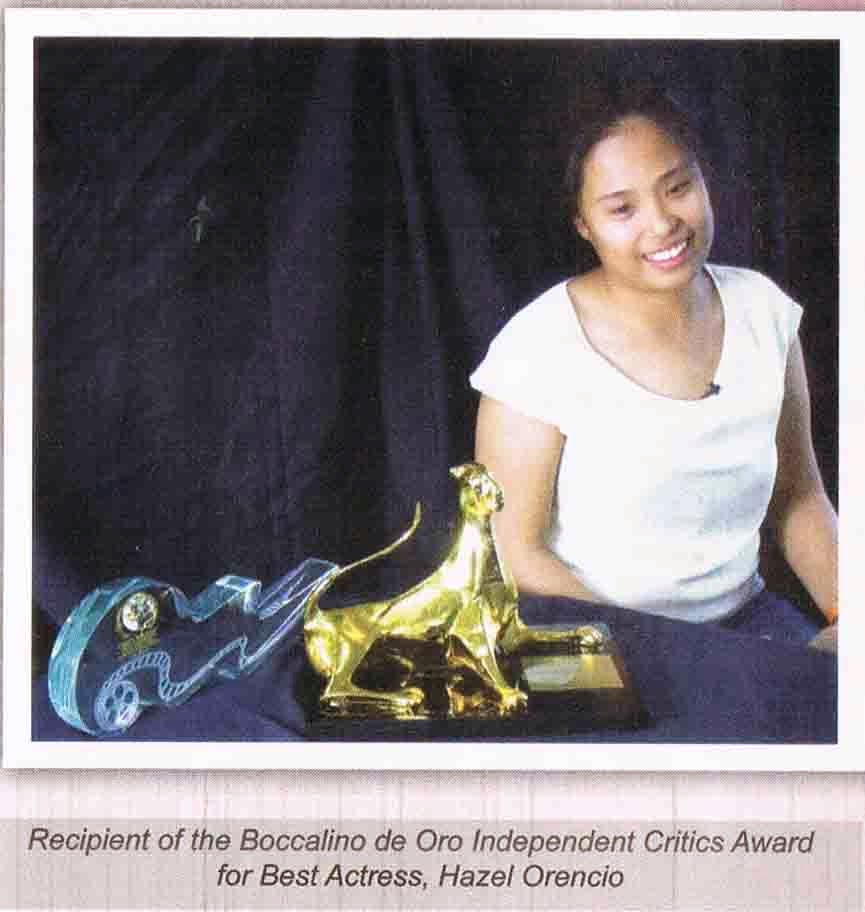 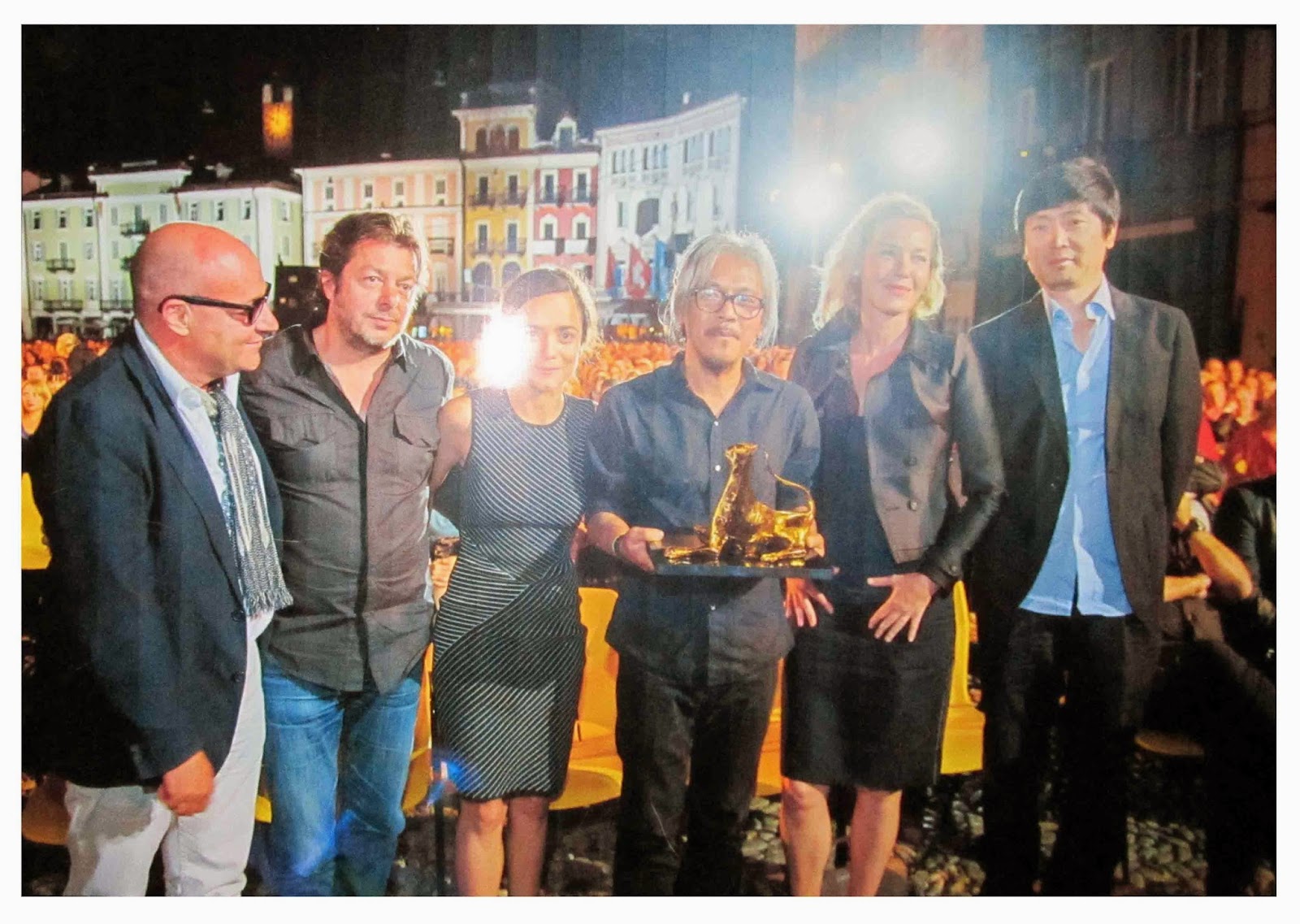 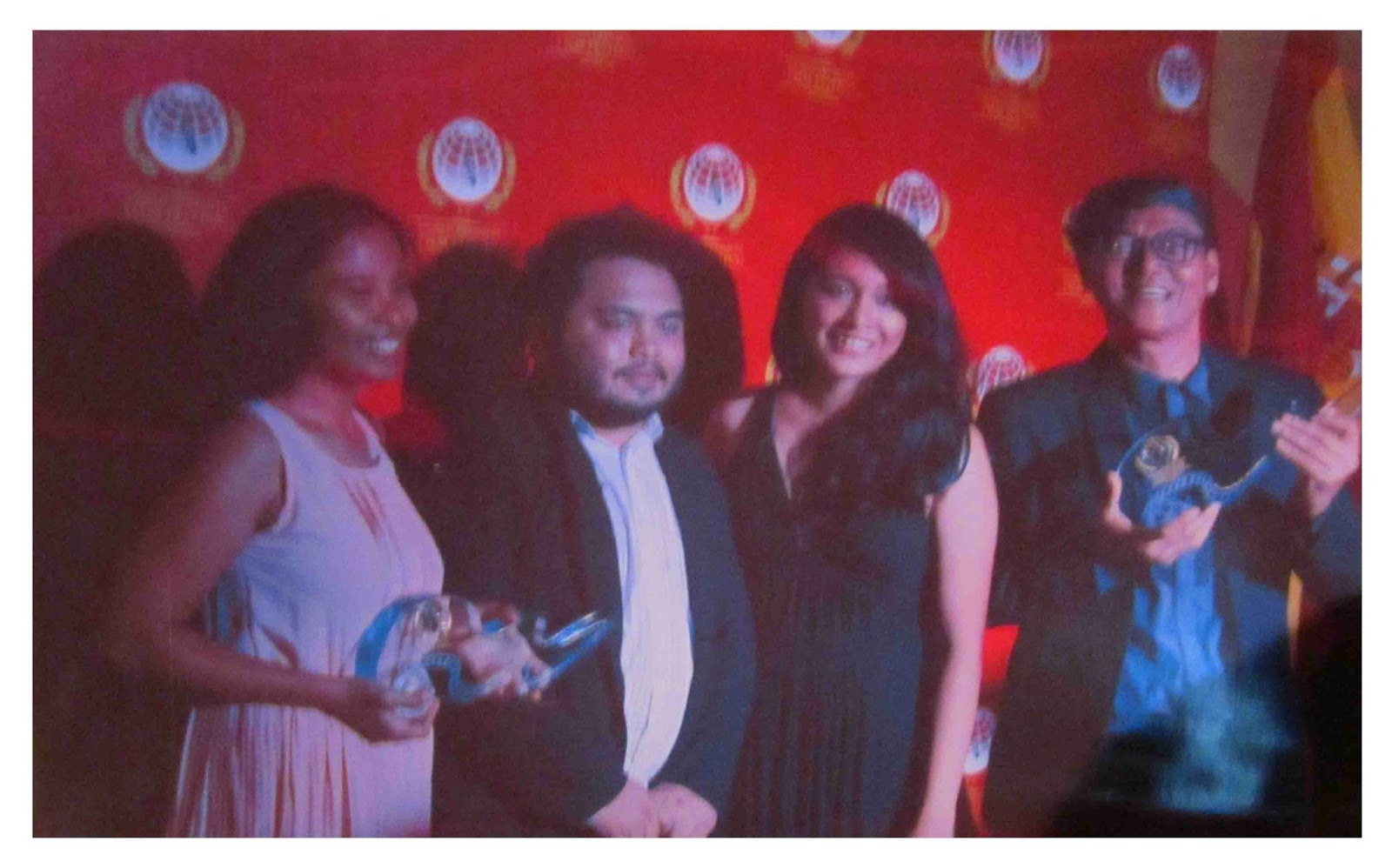 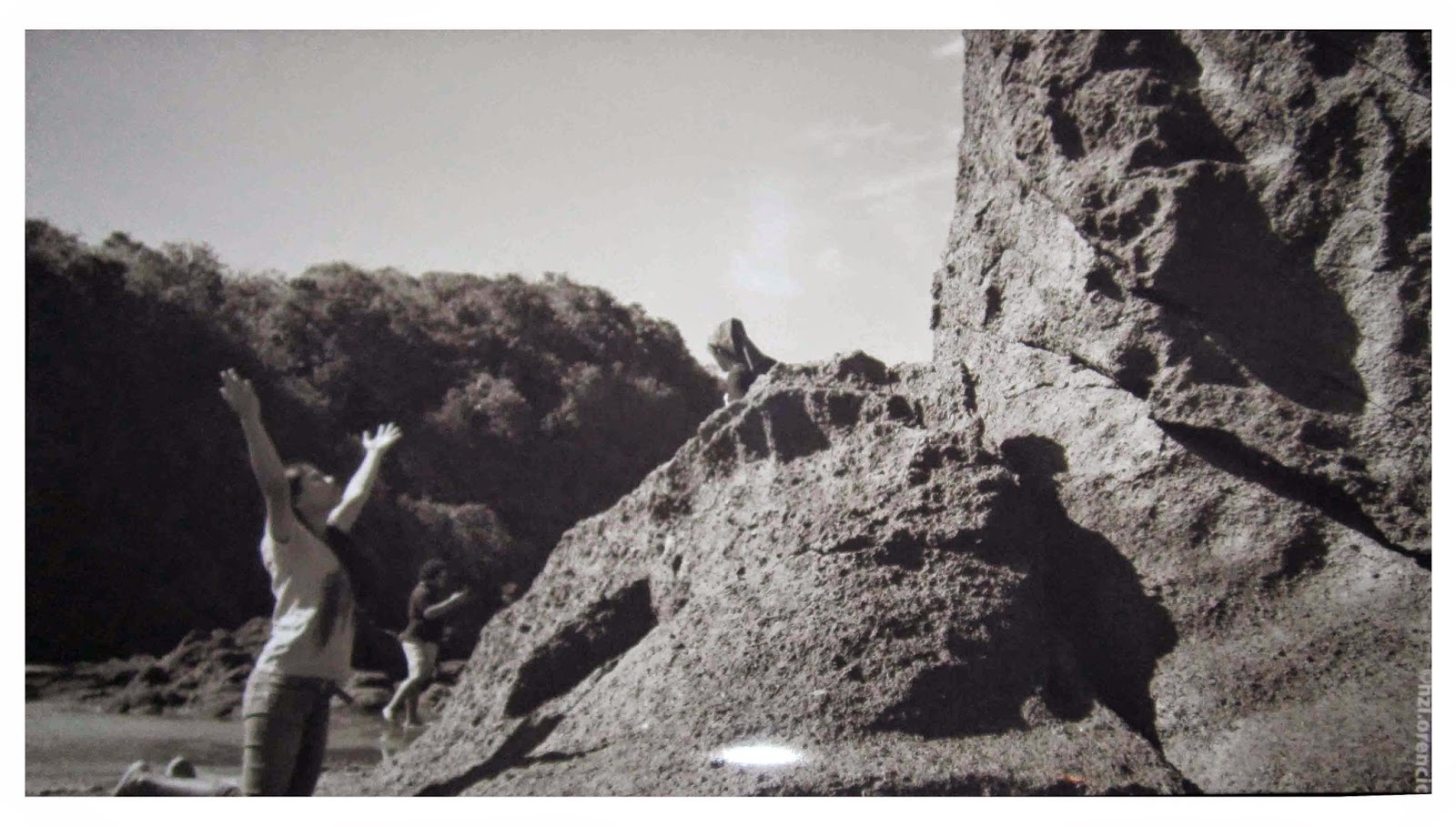 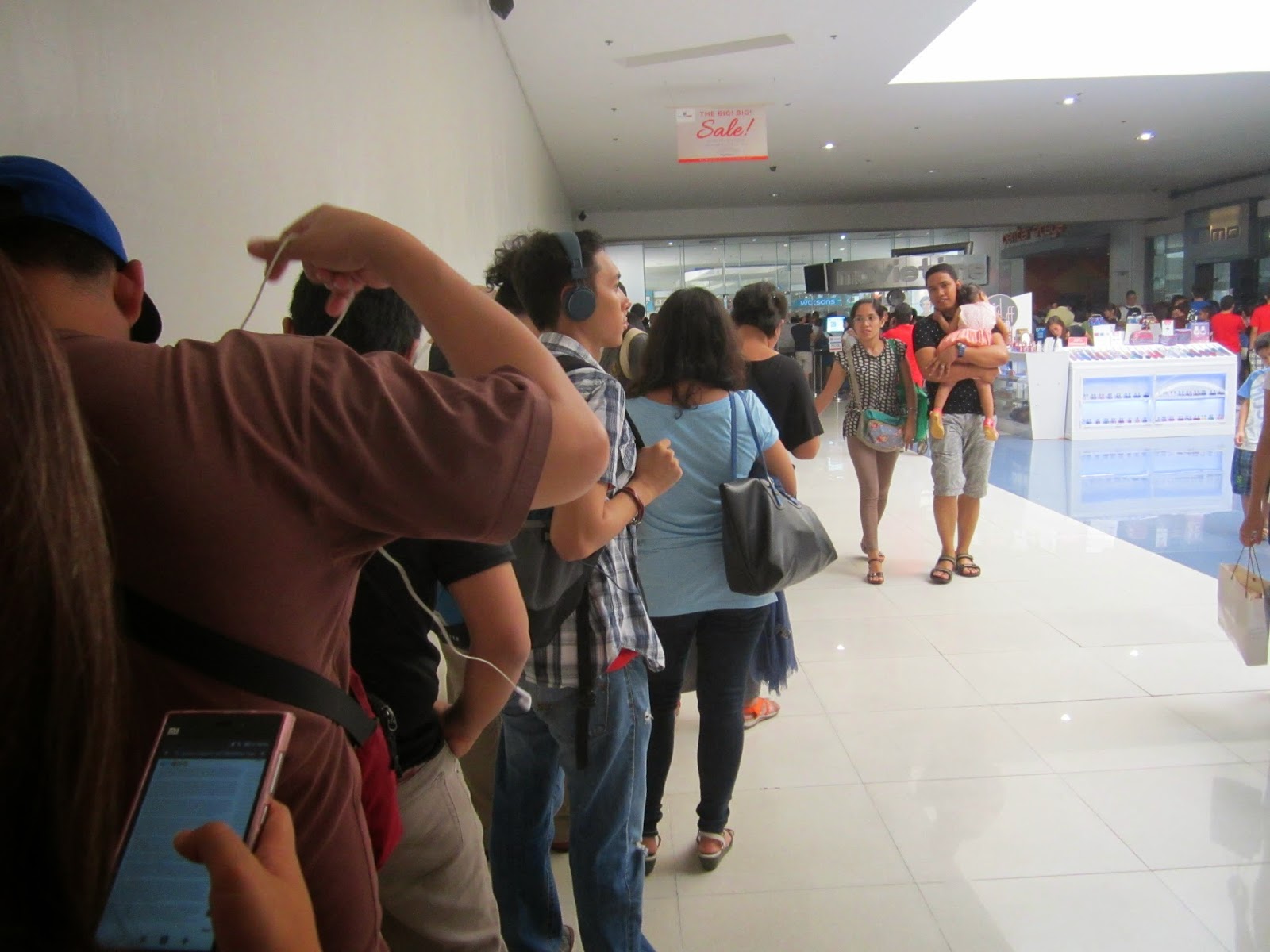 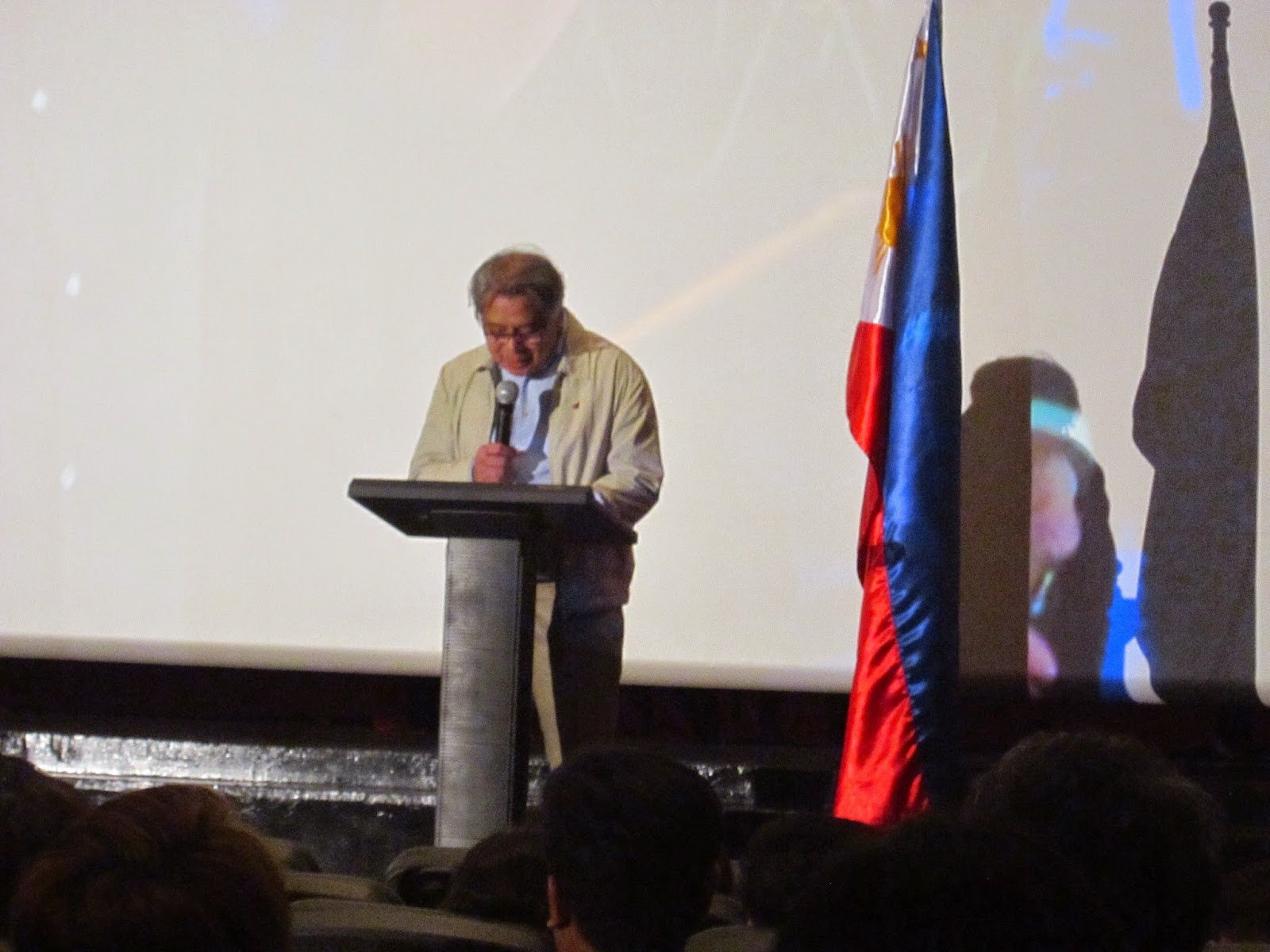 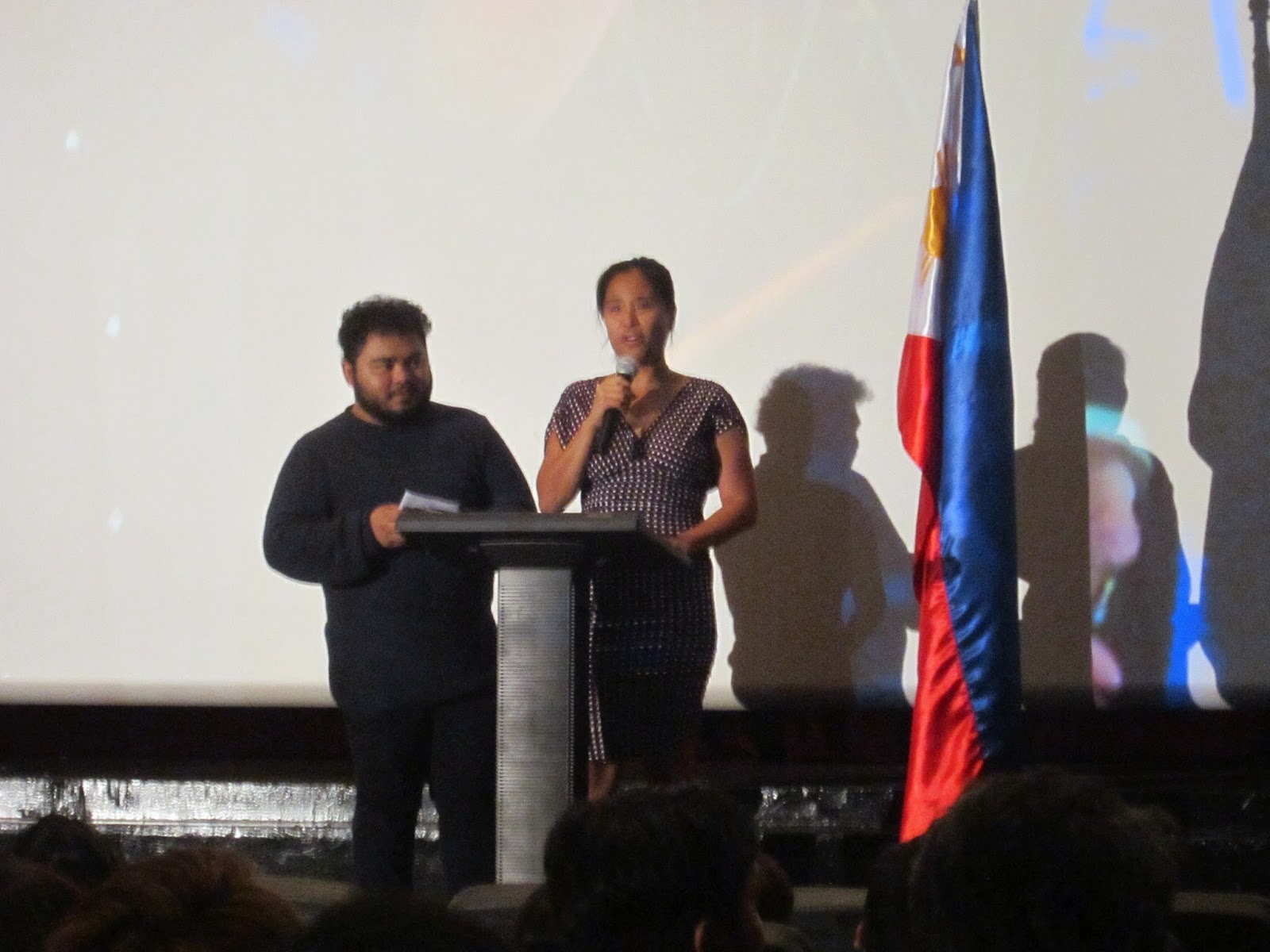 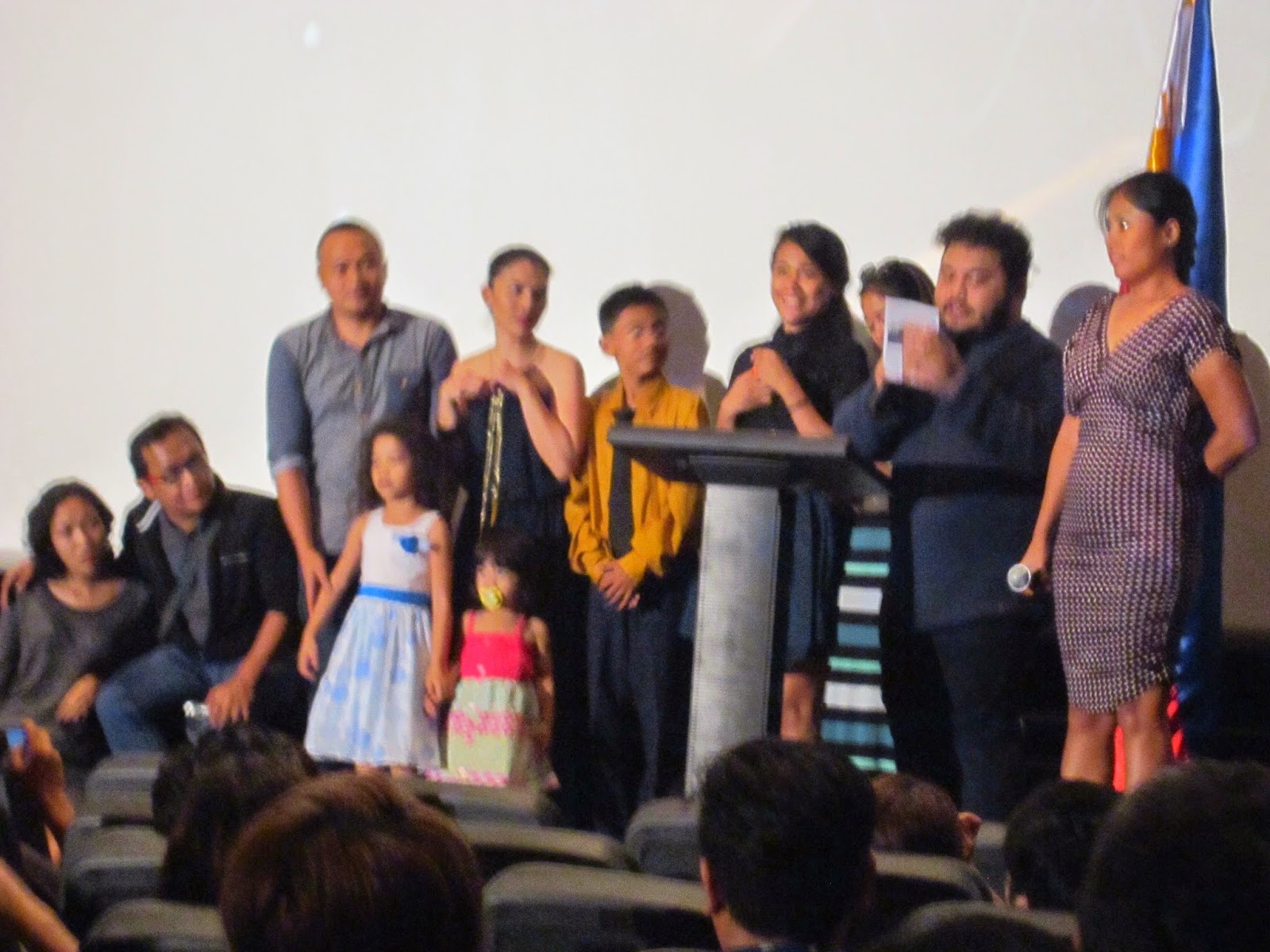 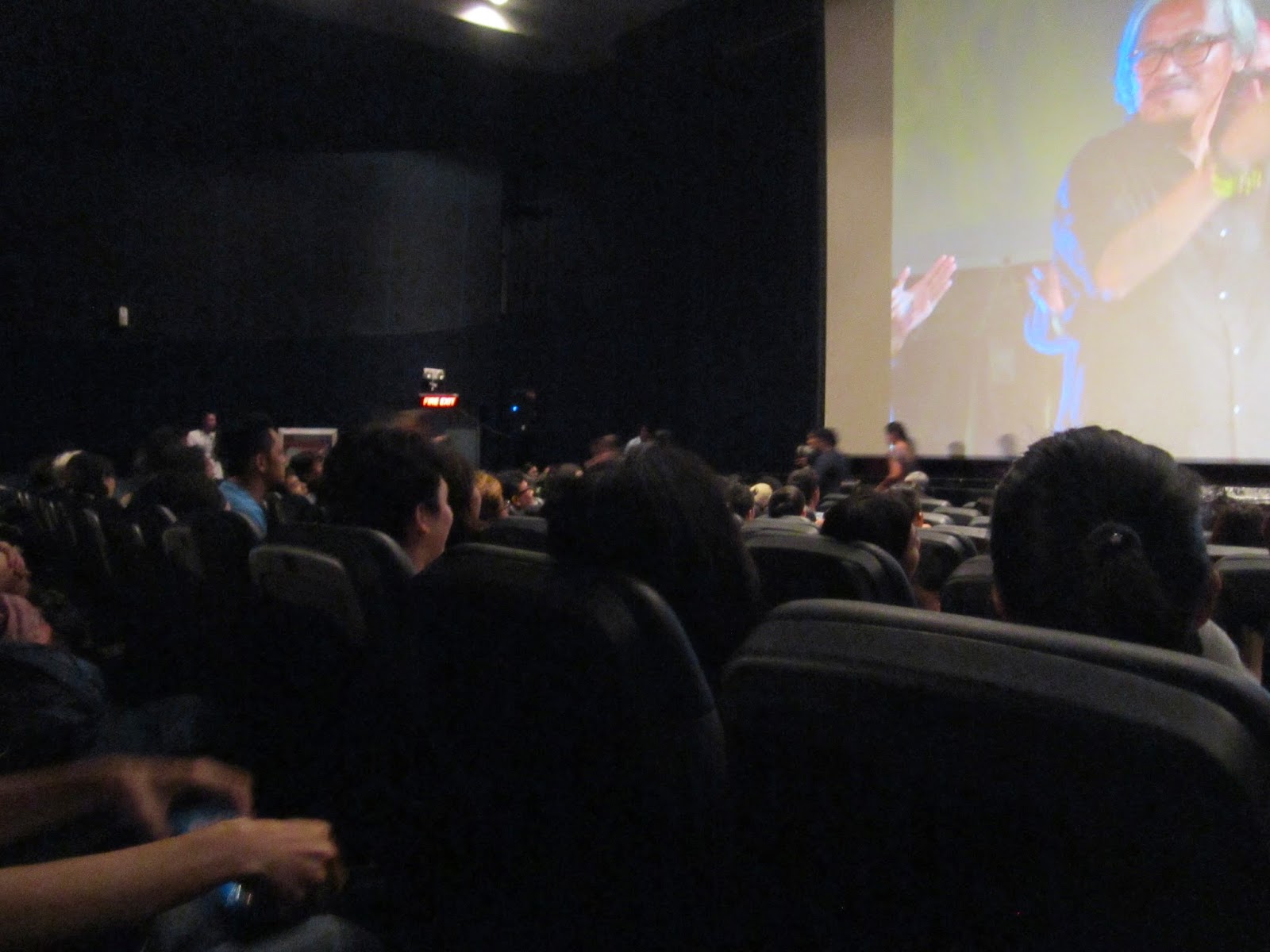 Inside the packed theater

THE NORA AUNOR HAPPENING: THE REVOLT OF THE BAKYA (The Weekly Nation, August 17, 1970) 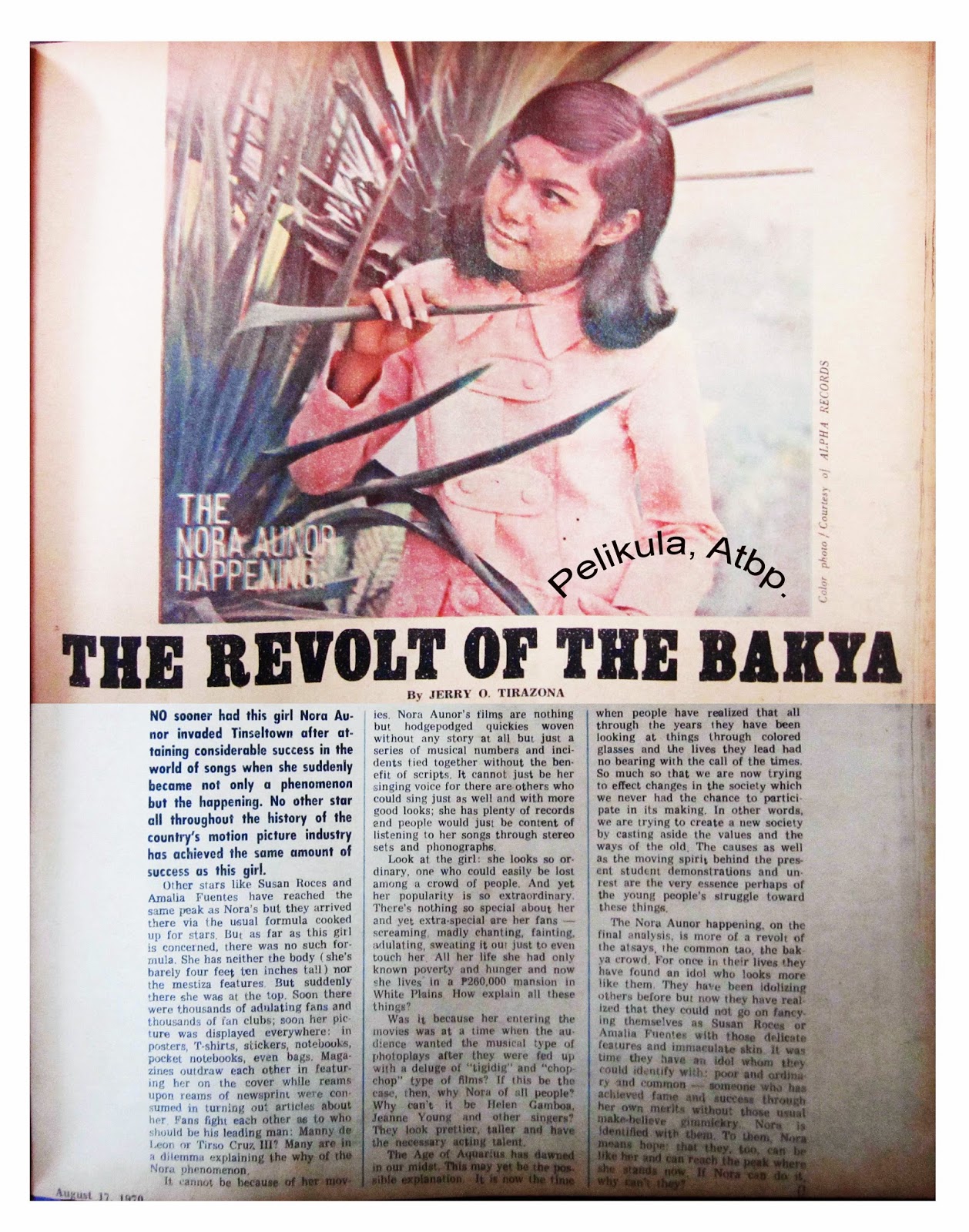 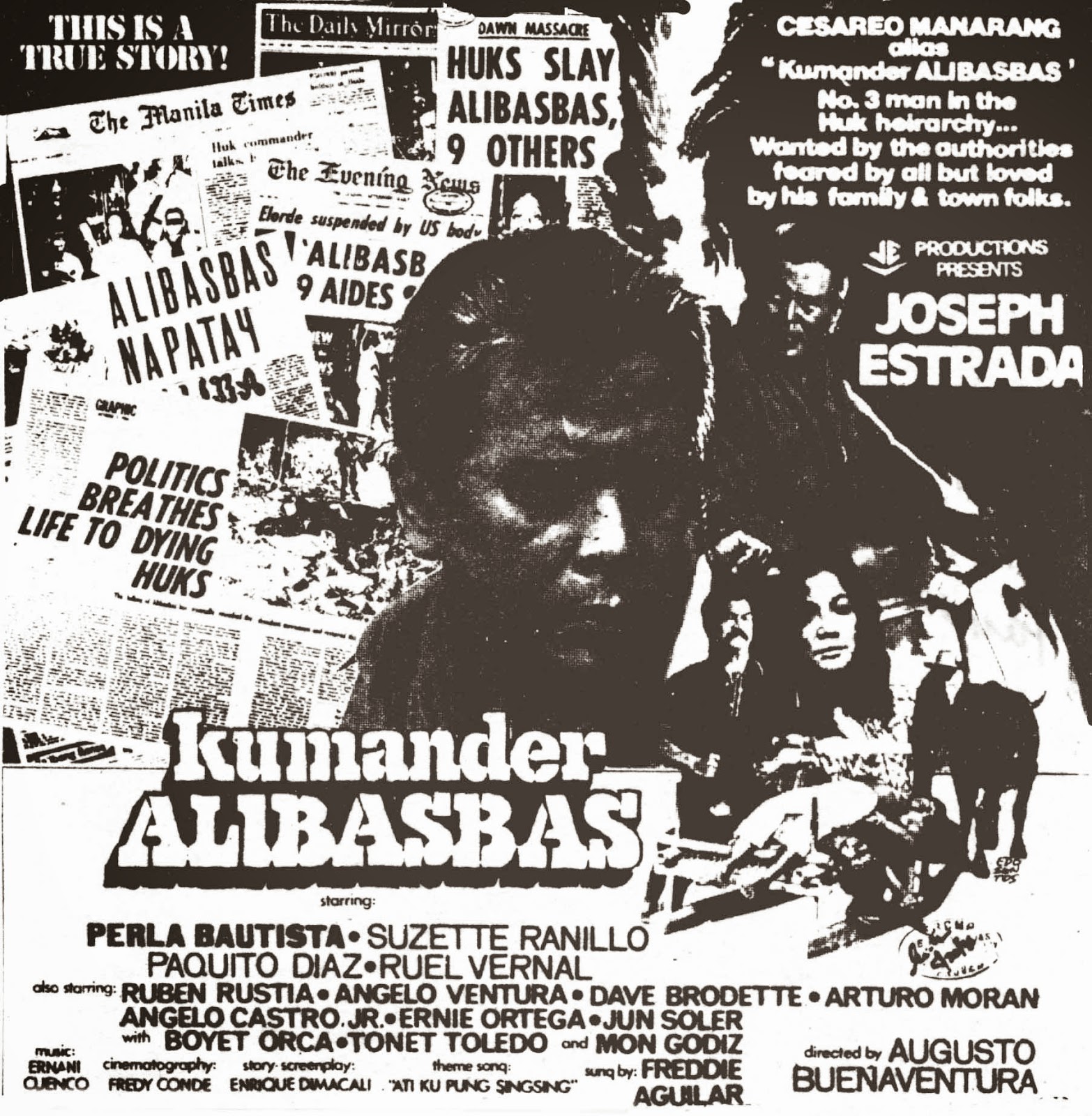 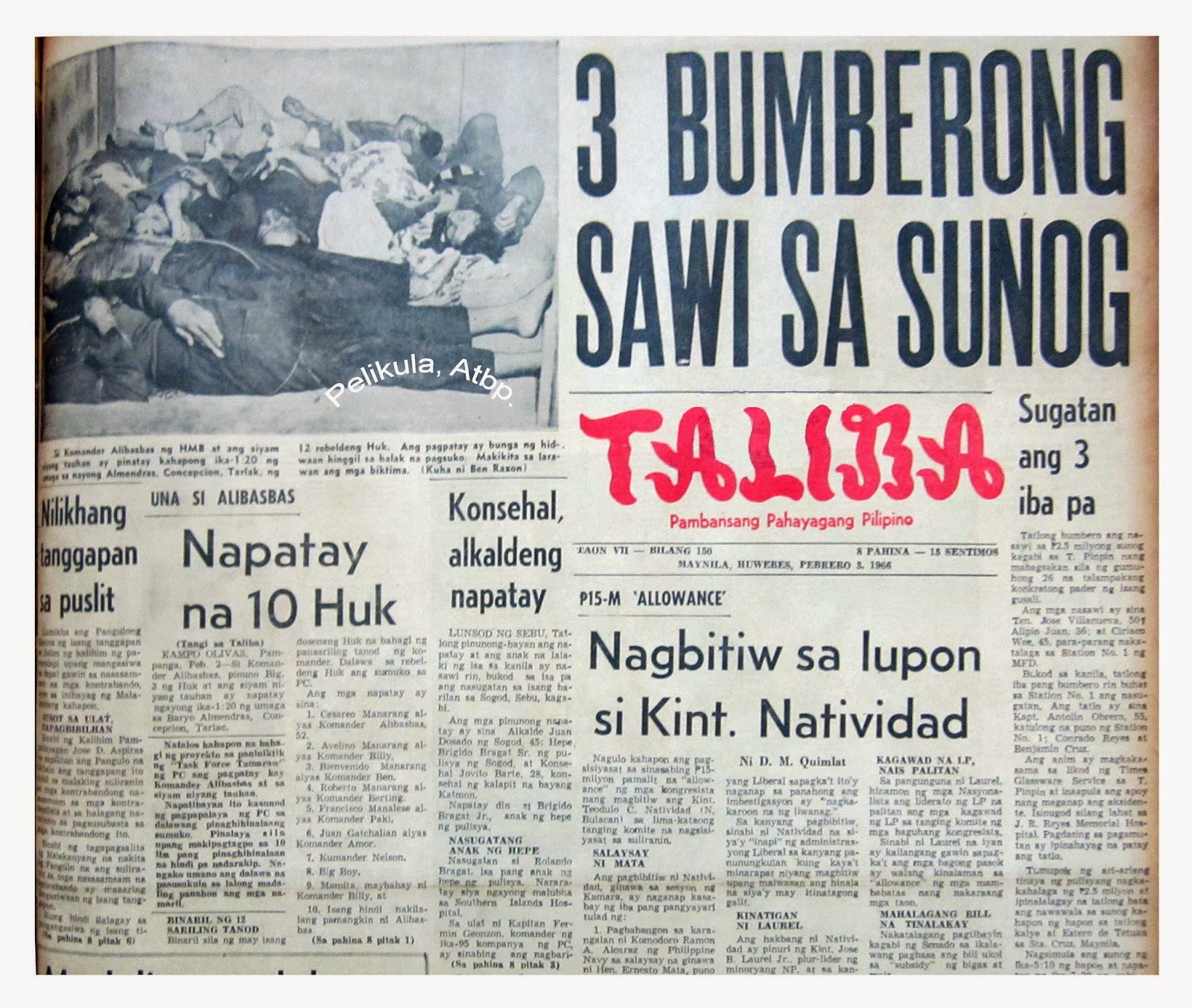 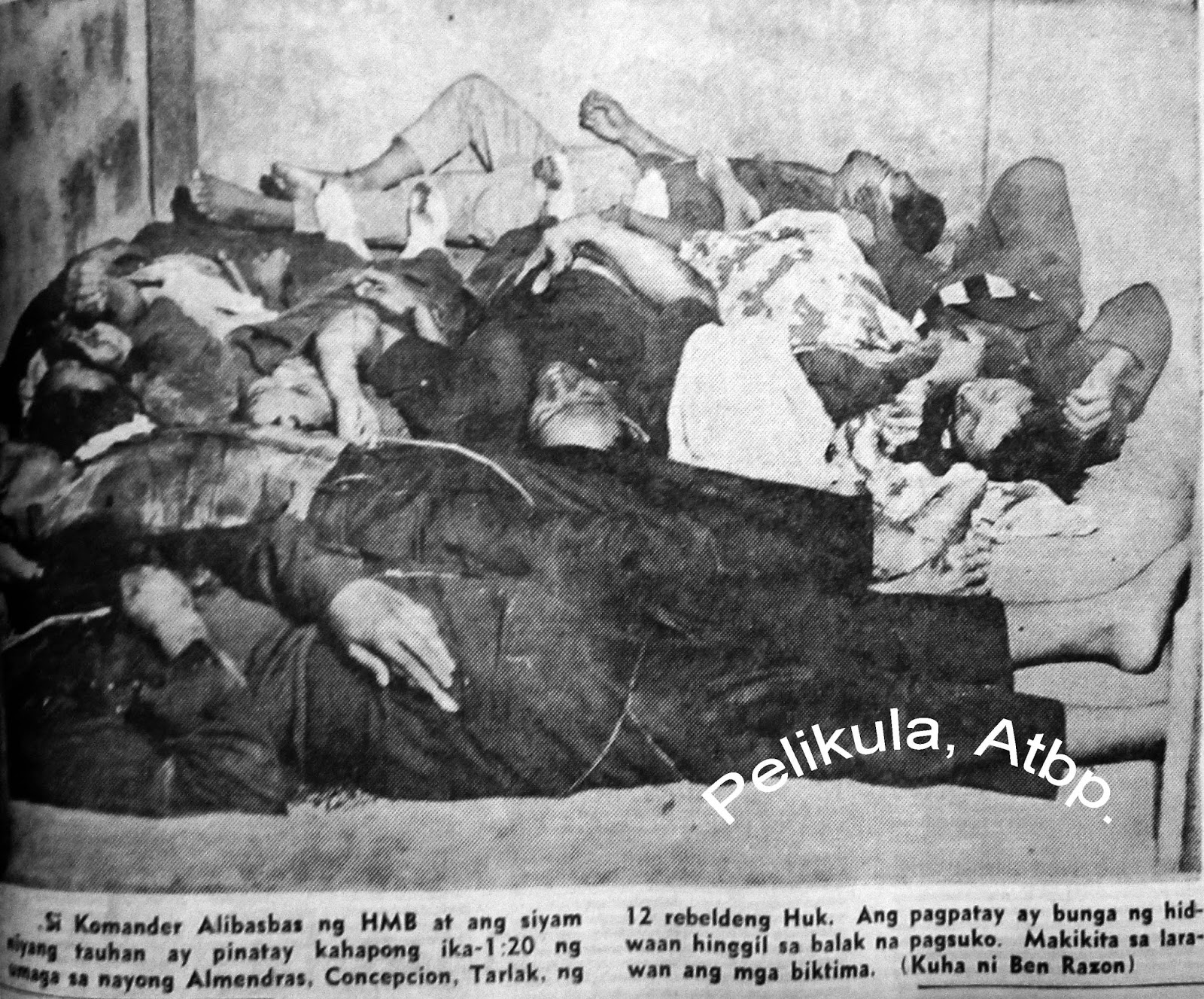