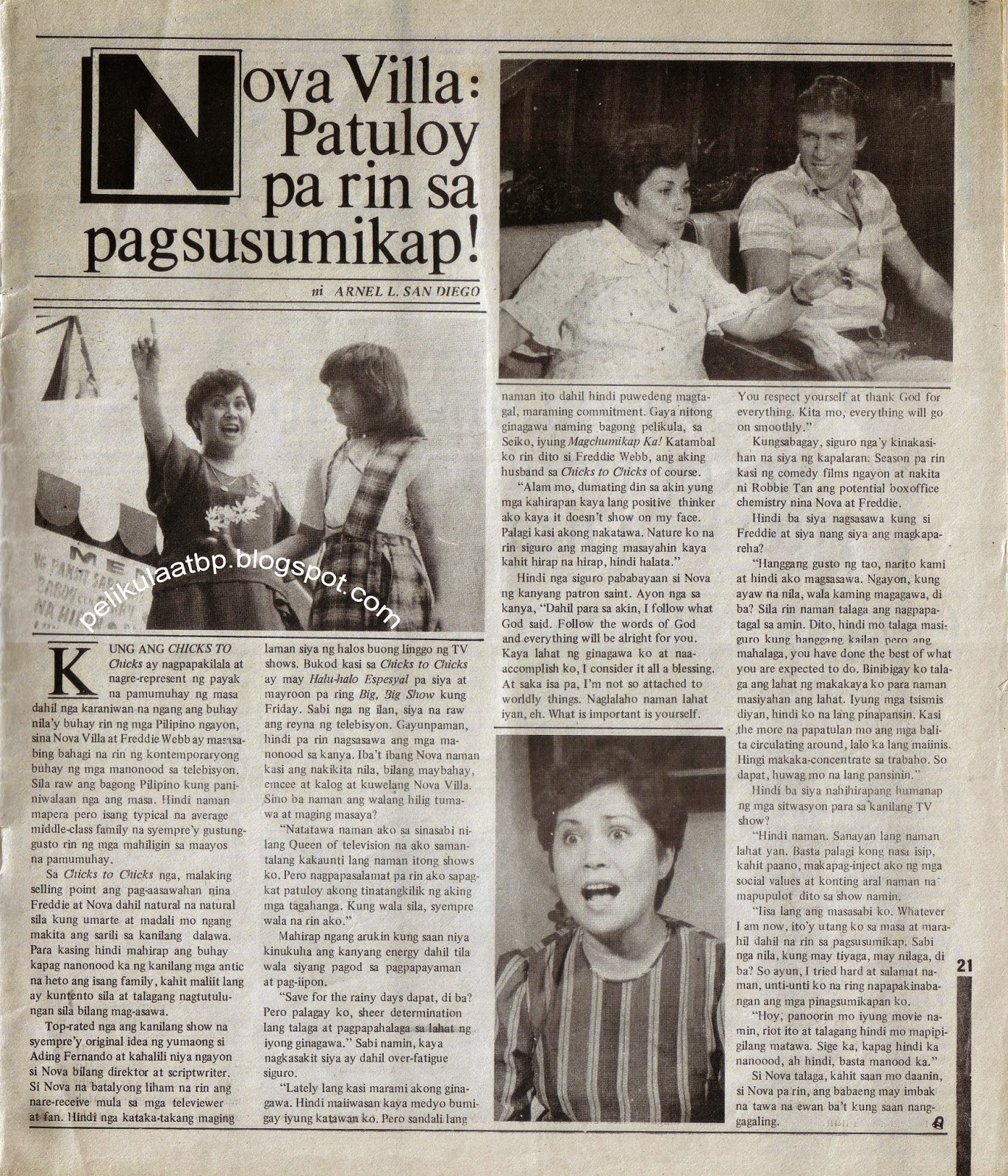 WHAT GOOD IS THE FLOWER IF WE CAN'T SMELL IT? (what good are the kind words if we can't hear them?), Jingle Extra Hot Magazine, October 12, 1984 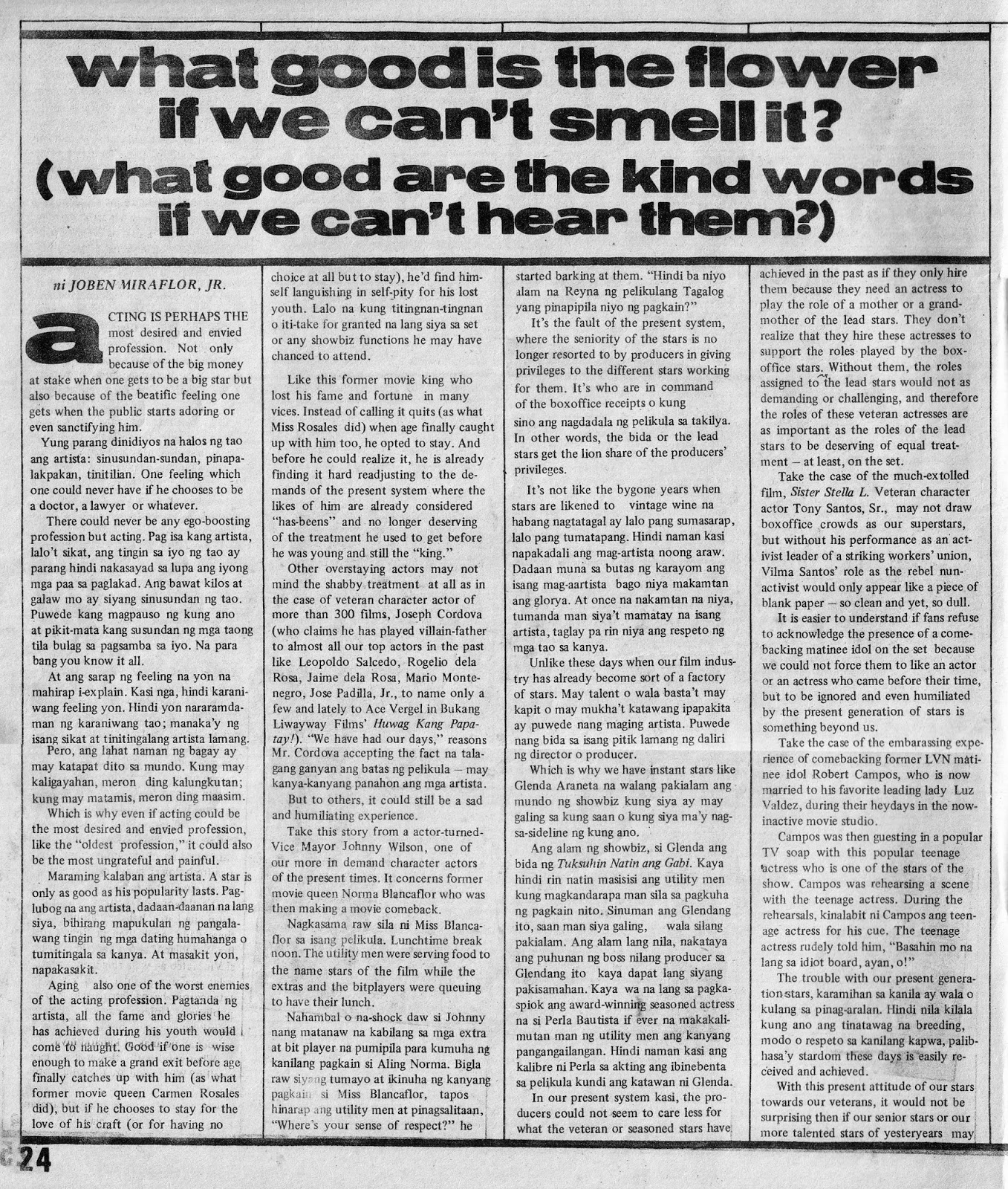 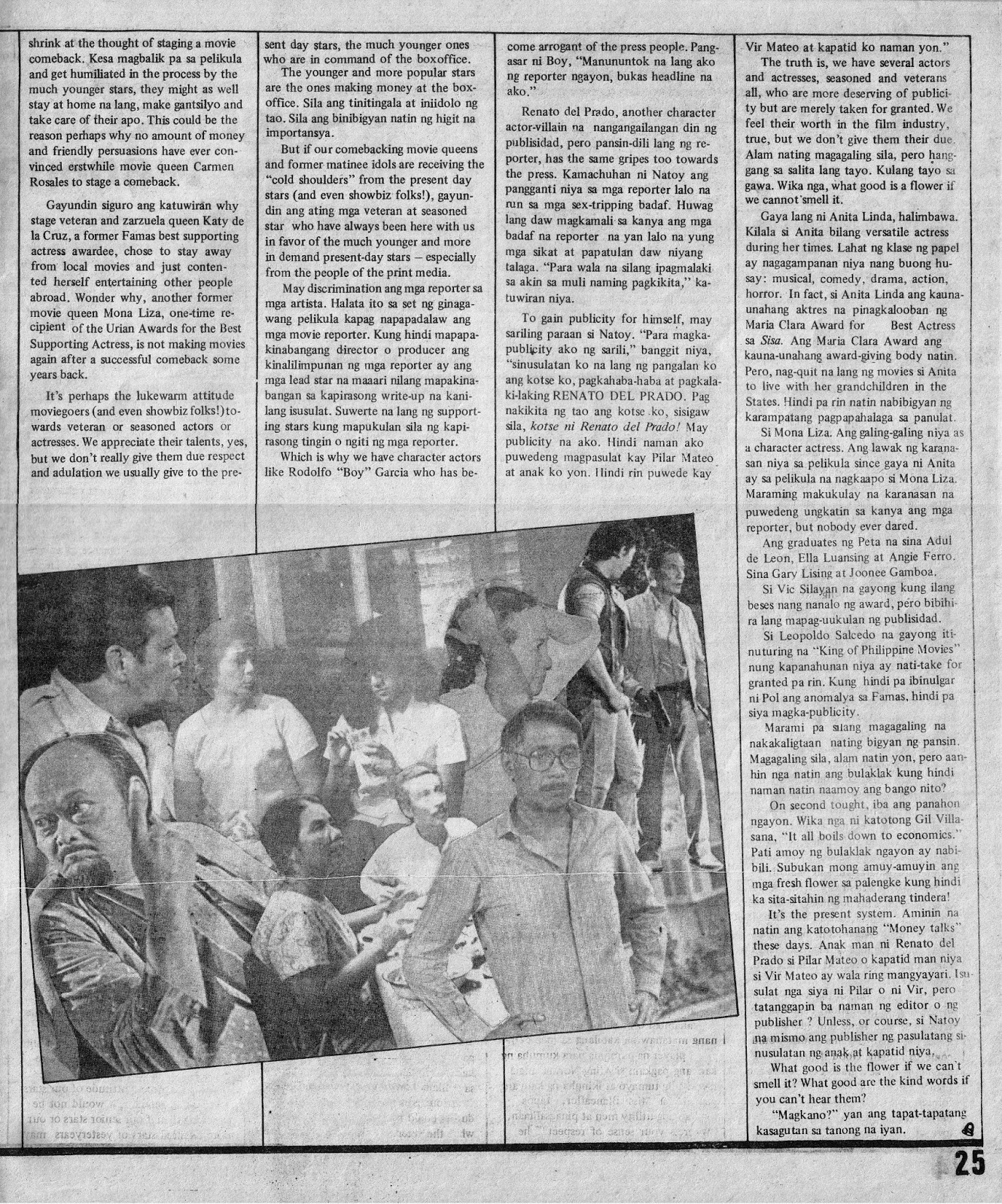 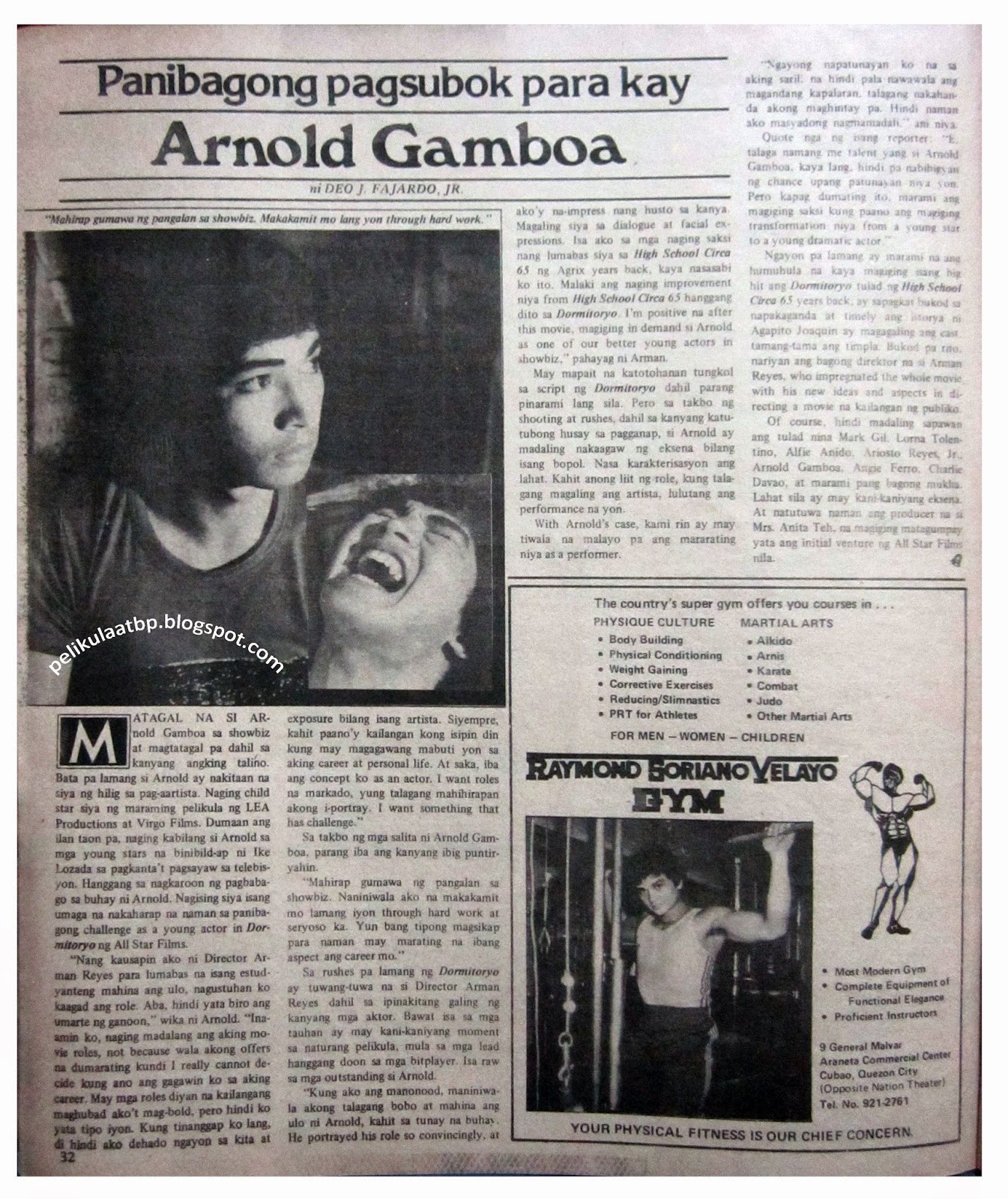 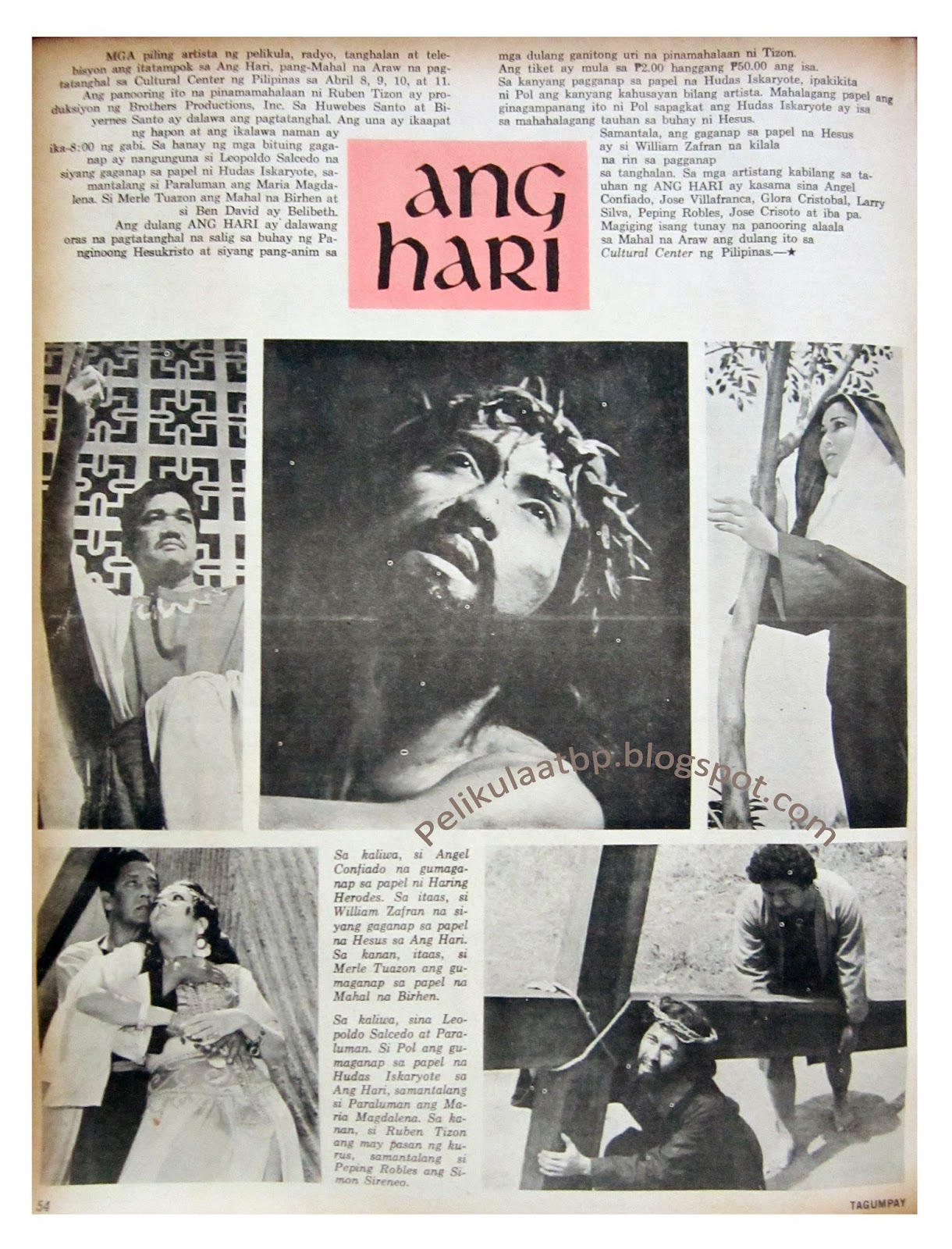 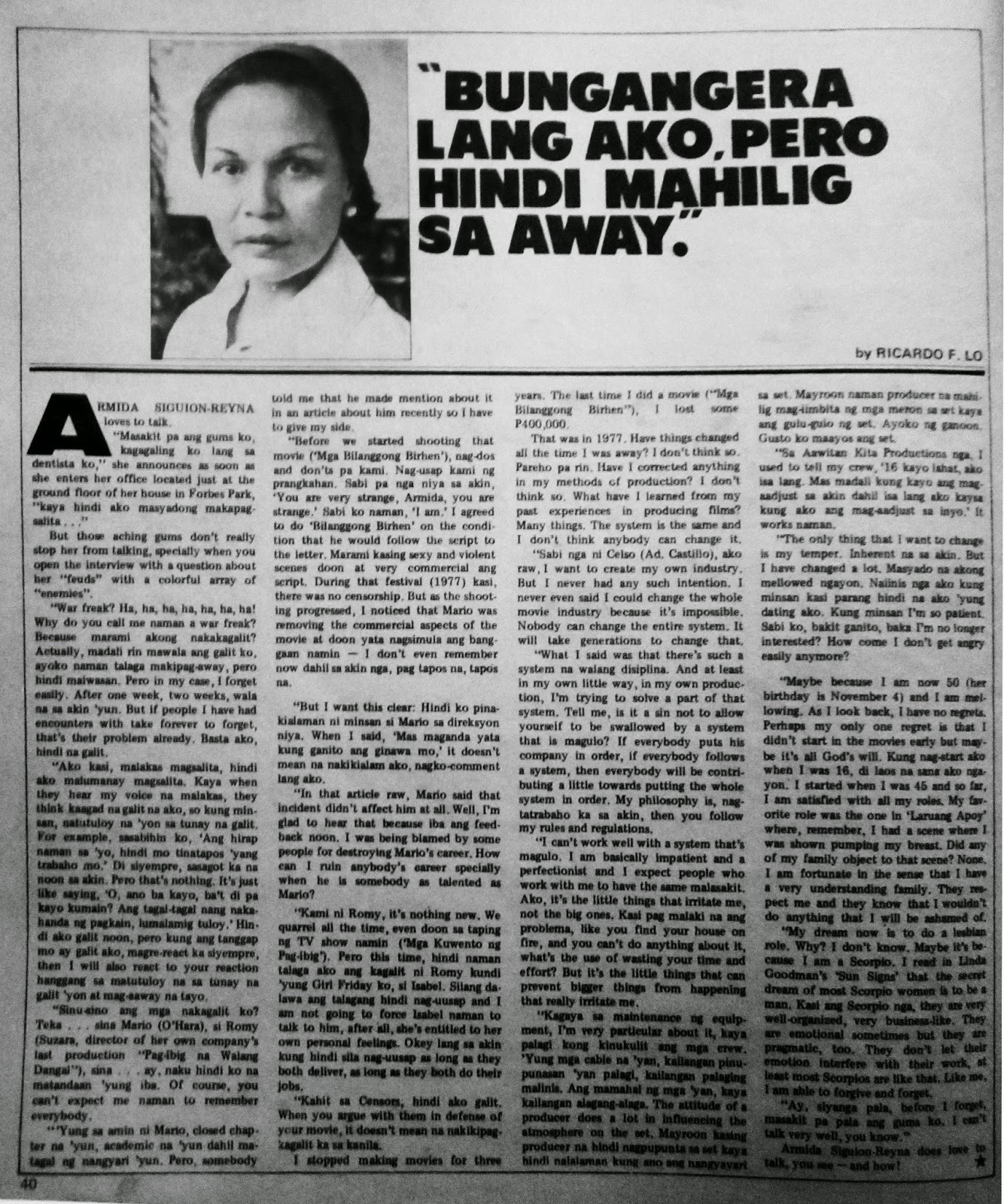 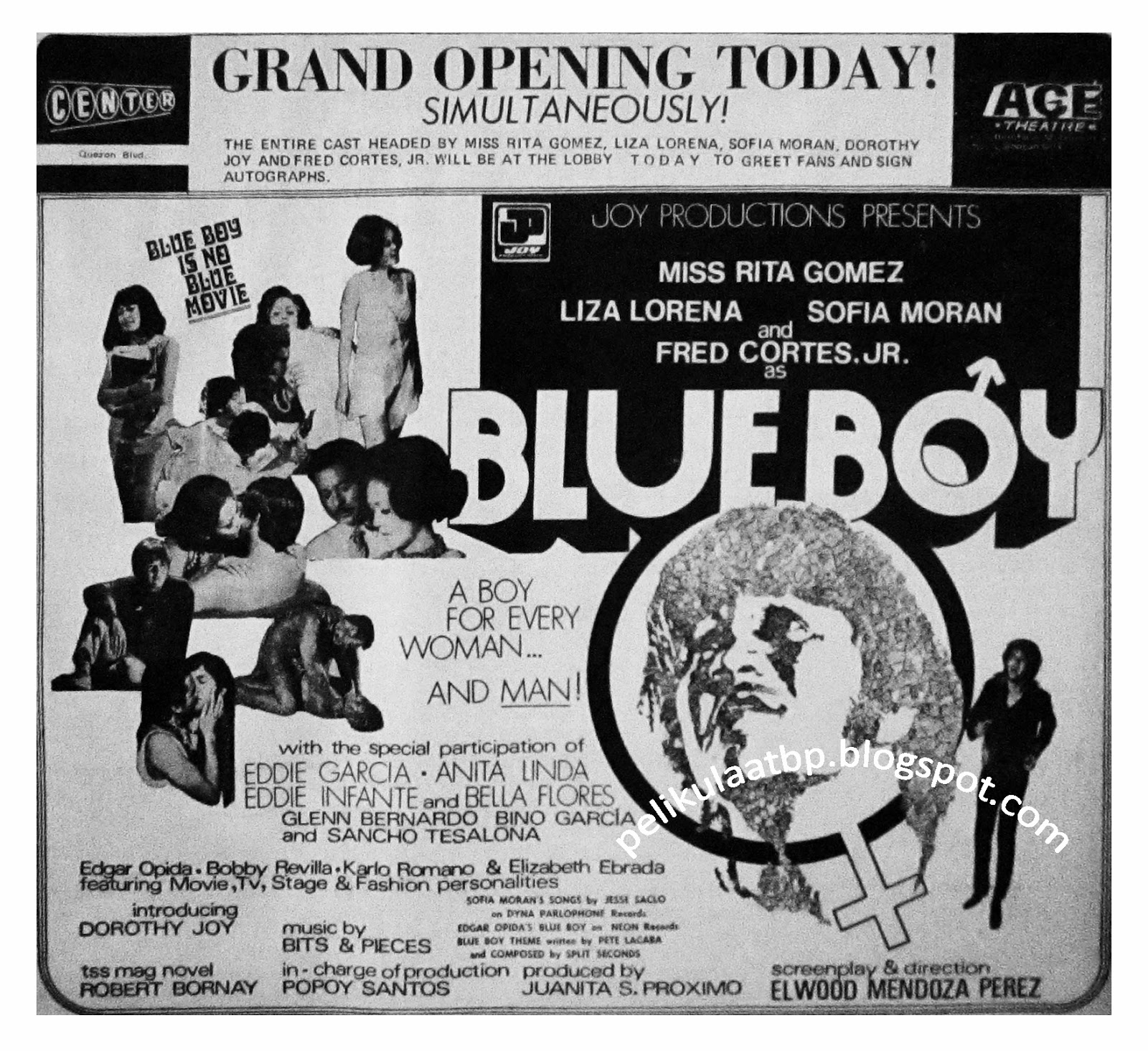 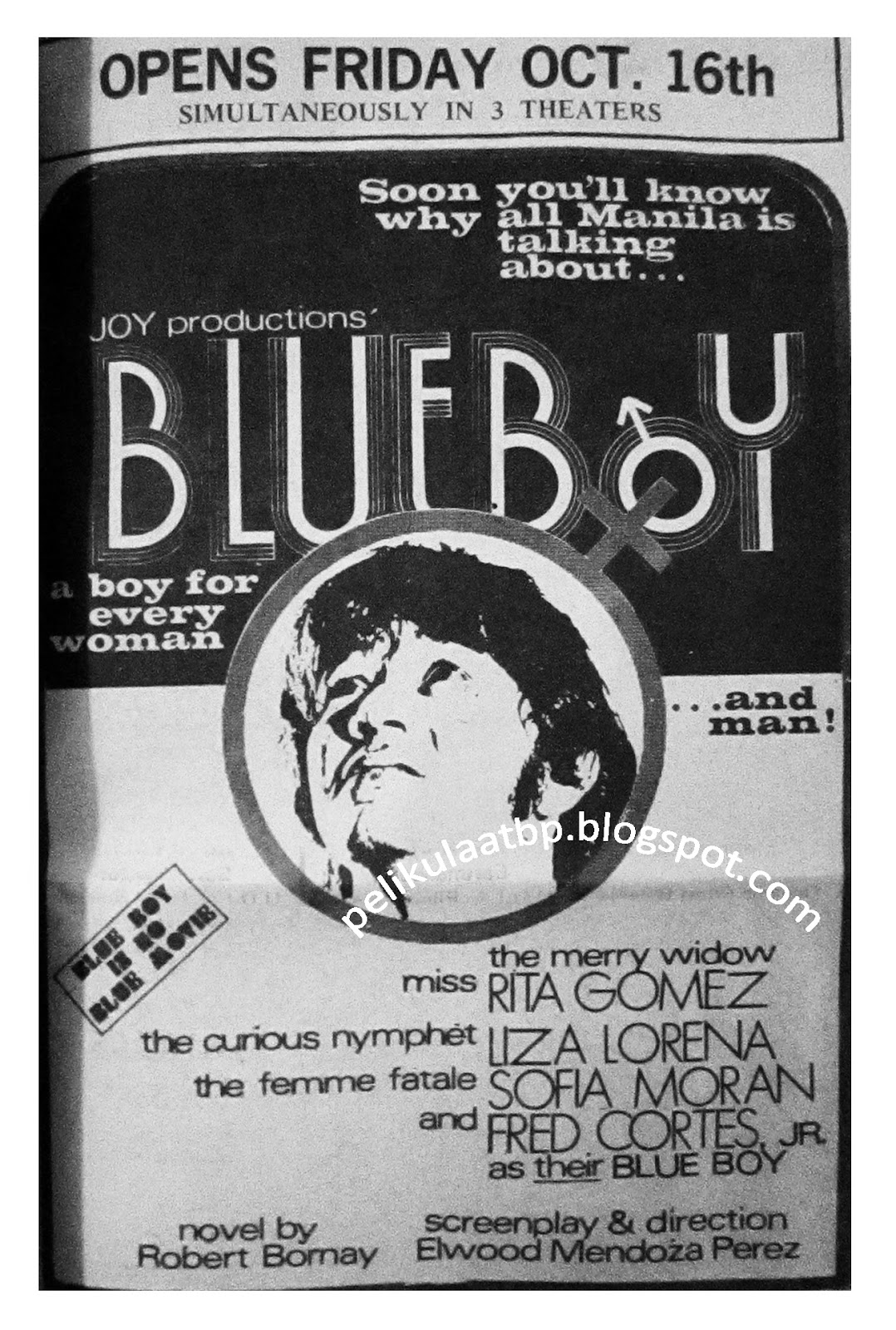 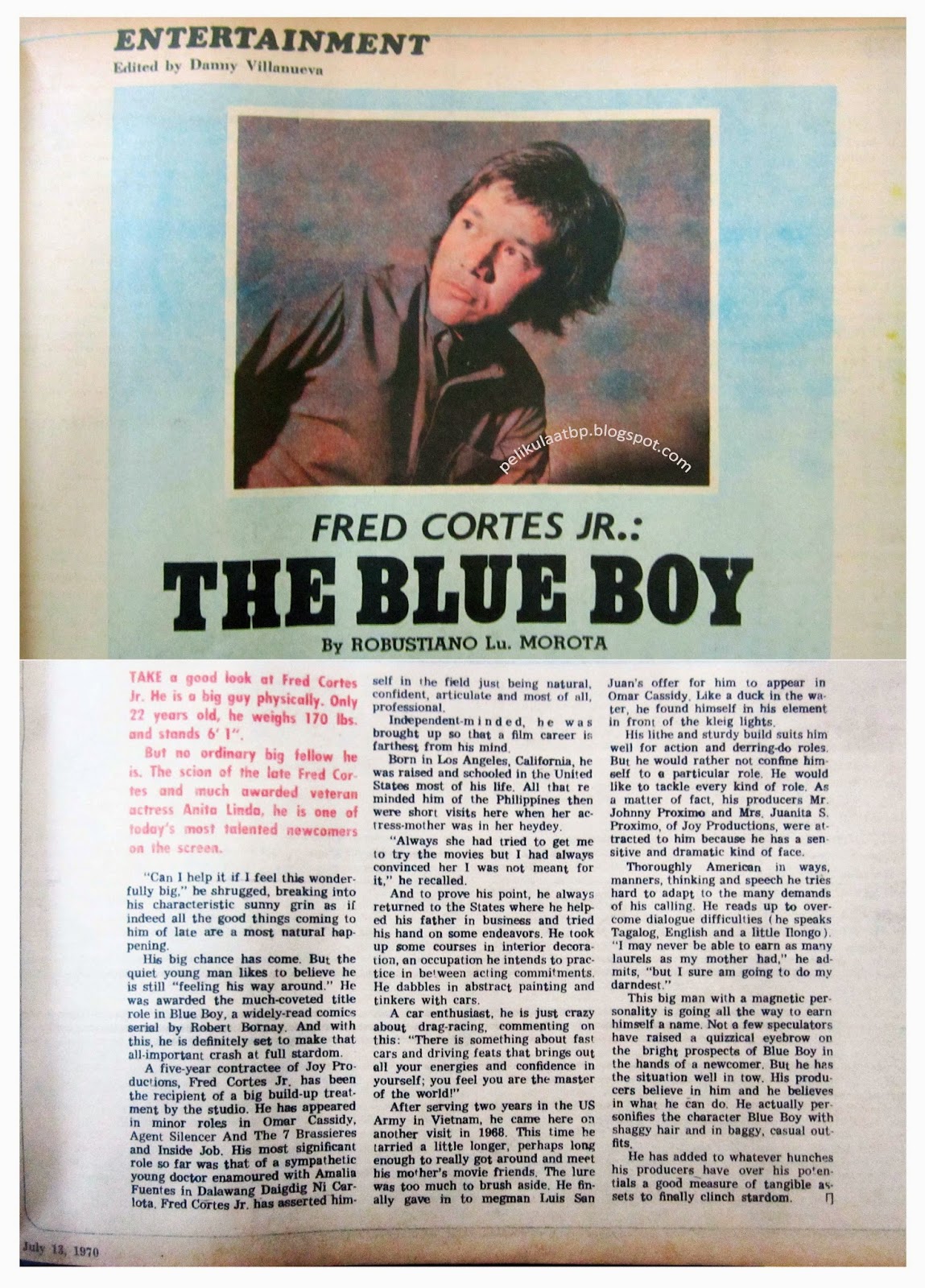 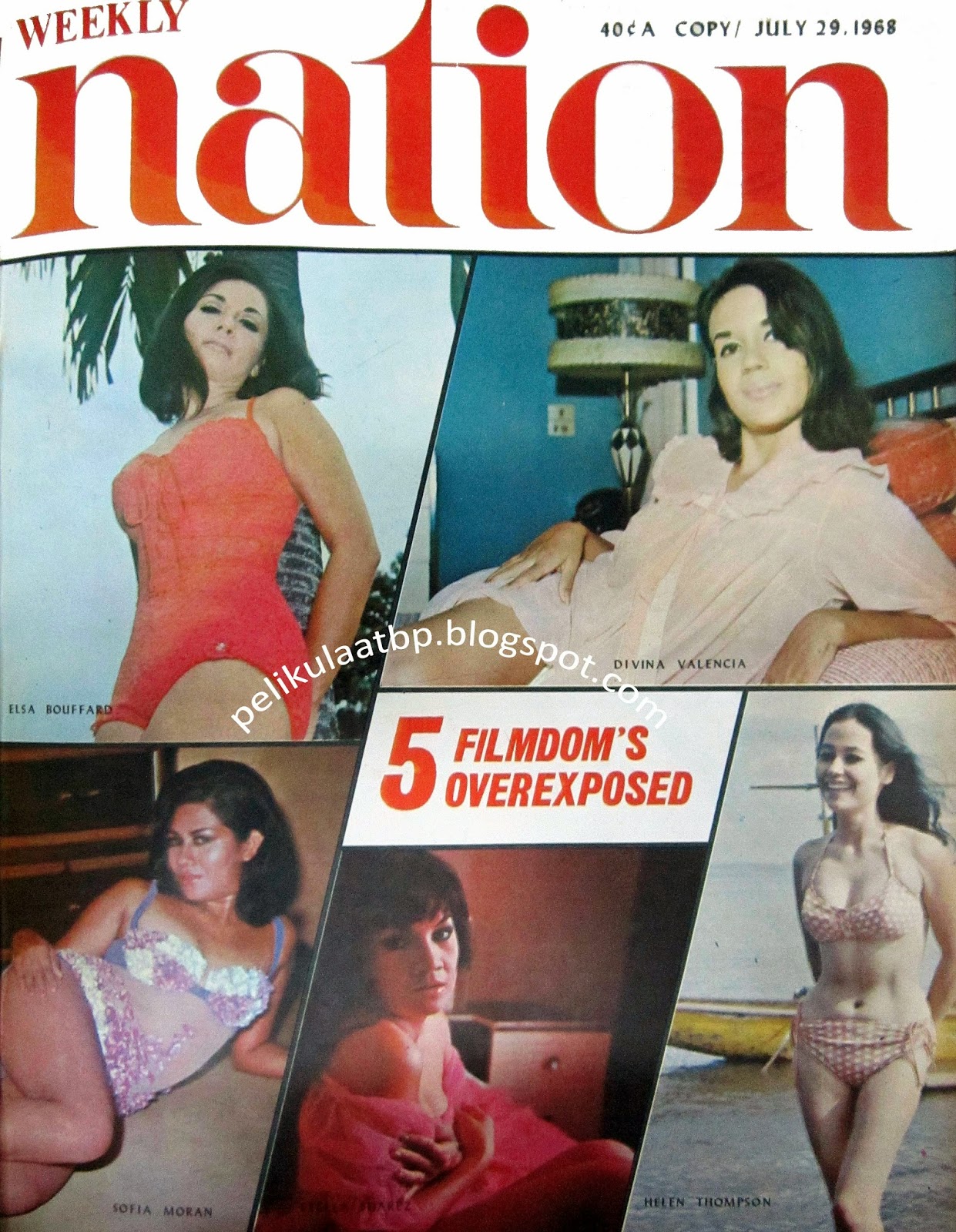 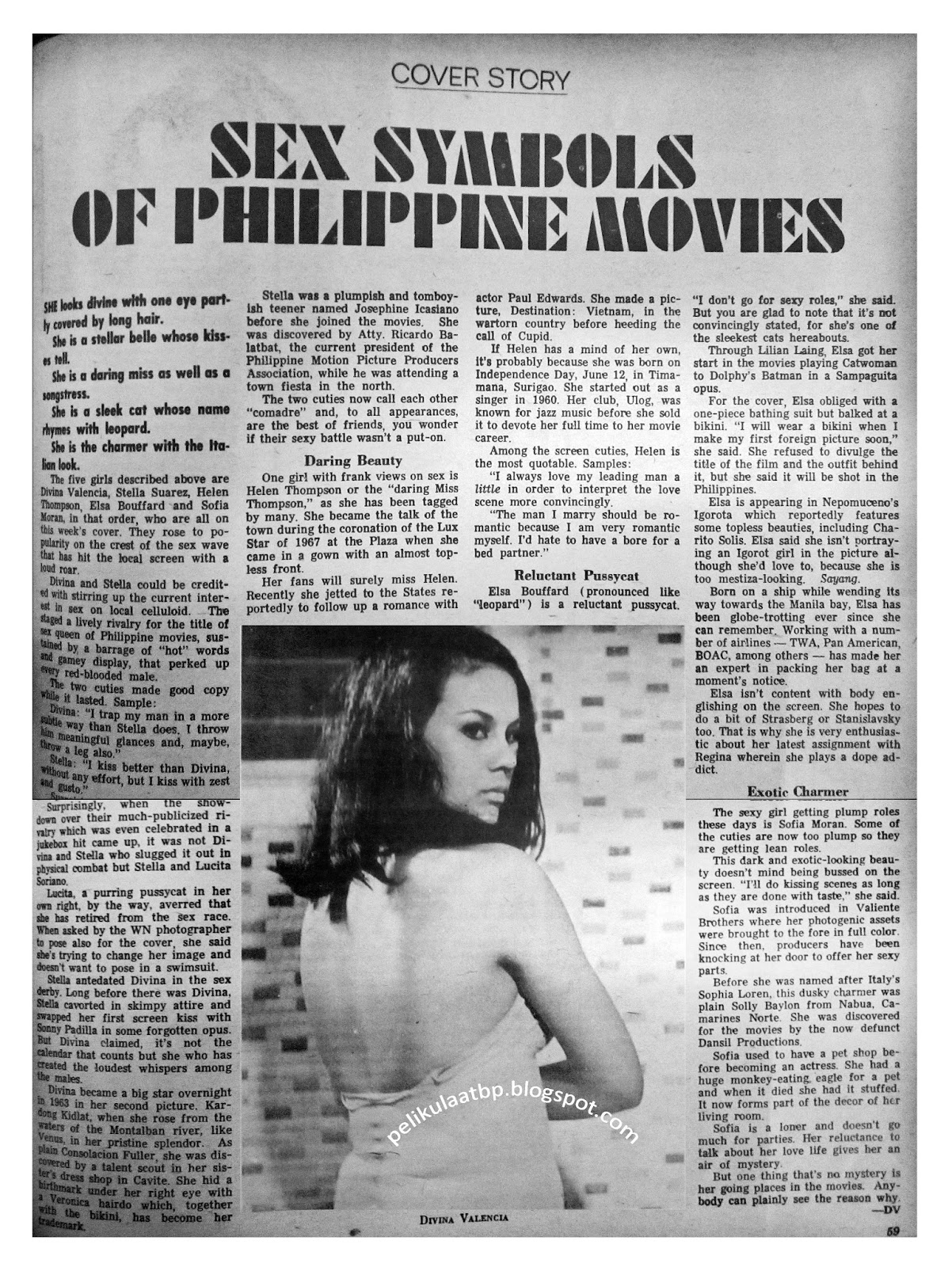 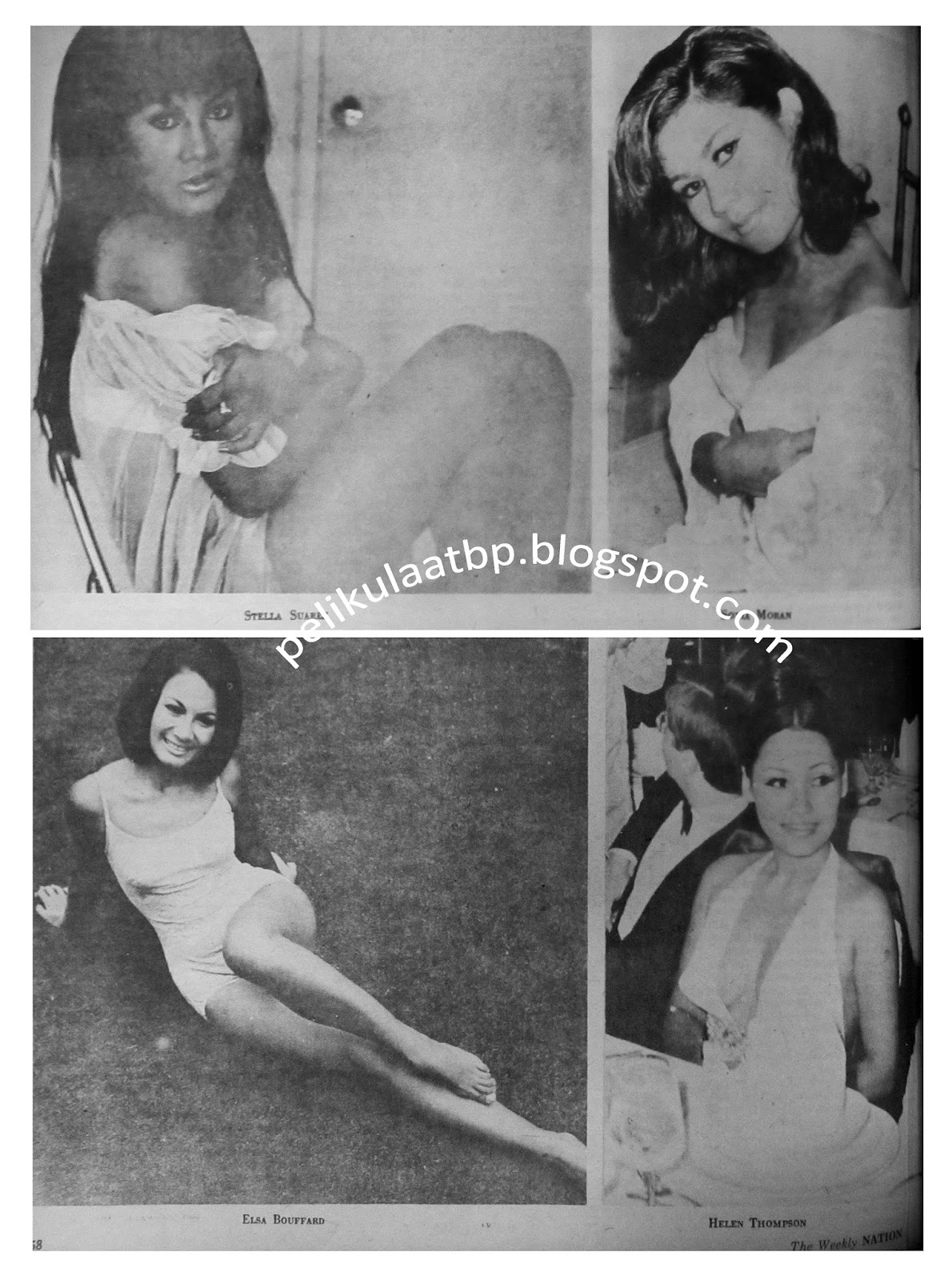 SHE looks divine with one eye partly covered by long hair.

She is a stellar belle whose kisses tell.

She is a daring miss as well as a songstress.

She is a sleek cat whose name rhymes with leopard.

She is the charmer with the Italian look.

The five girls described above are Divina Valencia, Stella Suarez, Helen Thompson, Elsa Bouffard and Sofia Moran, in that order, who are all on this week's cover.  They rose to popularity on the crest of the sex wave that has hit the local screen with a loud roar.

Divina and Stella could be credited with stirring up the current interest in sex on local celluloid.  They staged a lively rivalry for the title of sex queen of Philippine movies, sustained by a barrage of "hot" words and gamey display, that perked up every red-blooded male.

The two cuties made good copy while it lasted.  Sample:

Divina:  "I trap my man in a more subtle way than Stella does.  I throw him meaningful glances and, maybe, throw a leg also."

Stella:  "I kiss better than Divina, without any effort, but I kiss with zest and gusto."

Surprisingly, when the showdown over their much-publicized rivalry which was even celebrated in a jukebox hit came up, it was not Divina and Stella who slugged it out in physical combat but Stella and Lucita Soriano.

Lucita, a purring pussycat in her own right, by the way, averred that she has retired from the sex race.  When asked by the WN photographer to pose also for the cover, she said she's trying to change her image and doesn't want to pose in a swimsuit.

Stella antedated Divina in the sex derby.  Long before there was Divina, Stella cavorted in skimpy attire and swapped her first screen kiss with Sonny Padilla in some forgotten opus.  But Divina claimed, it's not the calendar that counts but she who has created the loudest whispers among the males.

Divina became a big star overnight in 1963 in her second picture, Kardong Kidlat, when she rose from the waters of Montalban river, like Venus, in her pristine splendor.  As plain Consolacion Fuller, she was discovered by a talent scout in her sister's dress shop in Cavite.  She hid a birthmark under her right eye with a Veronica hairdo which, together with the bikini, has become her trademark.

Stella was a plumpish and tomboyish teener named Josephine Icasiano before she joined the movies.  She was discovered by Atty. Ricardo Balatbat, the current president of the Philippine Motion Picture Producers Association, while he was attending a town fiesta in the north.

The two cuties now call each other "comadre" and, to all appearances, are the best of friends, you wonder if their sexy battle wasn't a put-on.

One girl with frank views on sex is Helen Thompson or the "daring Miss Thompson," as she has been tagged by many. She became the talk of the town during the coronation of the Lux Star of 1967 at the Plaza when she came in a gown with an almost topless front.

Her fans will surely miss Helen.  Recently she jetted to the States reportedly to follow up a romance with actor Paul Edwards.  She made a picture, Destination:  Vietnam, in the wartorn country before heeding the call of Cupid.

If Helen has a mind of her own, it's probably because she was born on Independence Day, June 12, in Timamana, Surigao.  She started out as a singer in 1960.  Her club, Ulog, was known for jazz music before she sold it to devote her full time to her movie career.

Among the screen cuties, Helen is the most quotable.  Samples:

"I always love my leading man a little in order to interpret the love scene more convincingly."

"The man I marry should be romantic because I am very romantic myself.  I'd hate to have a bore for a bed partner."

Elsa Bouffard (pronounced like "leopard") is a reluctant pussycat.  "I don't go for sexy roles," she said.  But you are glad to note that it's not convincingly stated, for she's one of the sleekest cats hereabouts.

Through Lilian Laing, Elsa got her start in the movies playing Catwoman to Dolphy's Batman in a Sampaguita opus.

For the cover, Elsa obliged with a one-piece bathing suit but balked at a bikini.  "I will wear a bikini when I make my first foreign picture soon," she said.  She refused to divulge the title of the film and the outfit behind it, but she said it will be shot in the Philippines.

Elsa is appearing in Nepomuceno's Igorota which reportedly features some topless beauties, including Charito Solis.  Elsa said she isn't portraying an Igorot girl in the picture although she'd love to, because she is too mestiza-looking.  Sayang.

Born on a ship while wending its way towards the Manila bay, Elsa has been globe-trotting ever since she can remember.  Working with a number of airlines -- TWA, Pan American, BOAC, among others -- has made her an expert in packing her bag at a moment's notice.

Elsa isn't content with body englishing on the screen.  She hopes to do a bit of Strasberg or Stanislavsky too.  That is why she is very enthusiastic about her latest assignment with Regina wherein she plays a dope addict.

The sexy girl getting plump roles these days is Sofia Moran.  Some of the cuties are now too plump so they are getting lean roles.

This dark and exotic-looking beauty doesn't mind being bussed on the screen.  "I'll do kissing scenes as long as they are done with taste," she said.

Sofia was introduced in Valiente Brothers where her photogenic assets were brought to the fore in full color.  Since then, producers have been knocking at her door to offer her sexy parts.

Before she was named after Italy's Sophia Loren, this dusky charmer was plain Solly Baylon from Nabua, Camarines Norte.  She was discovered for the movies by the now defunct Dansil Productions.

Sofia used to have a pet shop before becoming an actress.  She had a huge monkey-eating eagle for a pet and when it died she had it stuffed.  It now forms part of the decor of her living room.

Sofia is a loner and doesn't go much for parties.  Her reluctance to talk about her love life gives her an air of mystery.

But one thing that's no mystery is her going places in the movies.  Anybody can plainly see the reason why.  -- DV