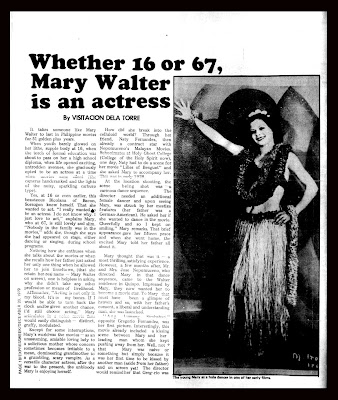 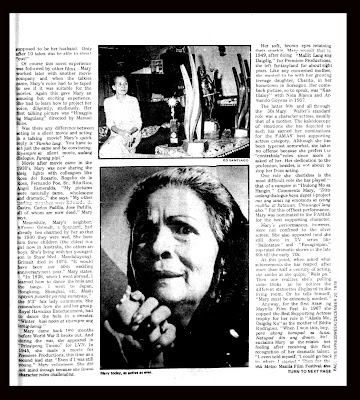 Mary Walter (September 10, 1912-February 25, 1993) was a Filipino actress whose 8 decade-long film acting career saw her transformation from a romantic lead in the silent film era into a wizenend fixture in horror movies in the late 1980s and early 1990s. For her body of work accomplished in an especially long career, she was honored with the Lifetime Achievement Award from both the Filipino Academy of Movie Arts and Sciences and the Gawad Urian.

Walter was born to an German father in what is now Sorsogon, Sorsogon. As a teen, Walter appeared on the Manila bodabil circuit as a chorus girl in the stage shows of Katy de la Cruz. She began her film career as a bit player . Walter first came into fame in 1927, when she starred in Ang Lumang Simbahan, staged from the popular novel by Florentino Collantes. Her leading man in that film was Gregorio Fernandez with whom she would be romantically paired in a succession of silent films, constituting perhaps the first "love-team" in Filipino cinema.

After appearing in many silent films, Walter easily made the transition when sound films emerged in the Philippines in the mid-1930s. She was among the stars who appeared in the 1942 LVN film Prinsipe Teñoso, the only film produced by a Filipino film studio during the Japanese Occupation.

In 1948, after a 21-year film career, Walter retired to her hometown in Sorsogon. Ten years later, she was induced to act again, and she appeared in LVN's Kastilaloy. Now in her forties, she was cast as matrons or mothers. As she further aged, Walter became one of the most identifiable character actresses in Philippine cinema. Fair, petite and gaunt, she became inalienably identified in grandmother roles. A chain smoker, her gravelly voice made her ideally cast in villainous roles, most prominently in the 1974 Lino Brocka film Tatlo, Dalawa, Isa. By the 1980s, she was a memorable presence in popular horror films such as Shake, Rattle and Roll (1984) and Tiyanak (1988).

In 1980, Walter received the FAMAS Lifetime Achievement Award. A similar award, this time from the Gawad Urian, was given to Walter in 1992.

Contrary to what is published in her IMDB biography, Walter was not the actress engaged in the first kissing scene in Philippine cinema (that distinction falls to Dimples Cooper). Walter never retired again after returning to film in 1958. She died on February 25, 1993.

the only juz said...

She is such a great actress! I can still remember her role in horror movies. Is it true that she died poor? :(


Saan po ang family house ng mga Walters? I've read somewhere (i lost my database on my digital files) it was in Batanags (Talisay?) , where can we contact her surviving family member? Me and two of my friends are doing an epic poetry based loosely on her character inspired bu one modern filipno artist Hezekiah Lopez "Isang Daan" (centenial) . I am base abroad as a teacher and i seldom visit Philippines, for our literary work. to be authentic we need some details and permission of her livng relatives complete details not only based on written biography.
Sana matulungan nyo po kami at mailahad din namin sa mundo ang makulay na buhay ni Mary Walter o halntulad na buhay na kanyang tinunghayan.